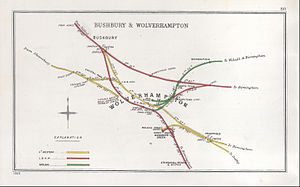 The town of Wolverhampton became a city in the year 2000. It lies approximately 12 miles north-west of Birmingham, and 13 miles east of Bridgnorth. Although it was not situated on the Severn Valley Railway, the town had a number of associations with it.

The Railways of Wolverhampton

The Railway Clearing House map shows the layout of railways around central Wolverhampton from 1914. At that time the town had two main railway stations, Wolverhampton Low Level and Wolverhampton High Level.

The construction of the Severn Valley Railway in 1862 provided a more direct connection between the railway junction towns of Worcester and Shrewsbury than the circuitous route via Wolverhampton, involving the former OW&WOxford Worcester and Wolverhampton Railway, S&BRBritish Rail or British Railways and S&WJR lines.

Today the former LNWRLondon & North Western Railway route forms the West Coast Main Line. The present day Wolverhampton station, which dates from 1967, is on the site of the former High Level station[2].

The late Ray Tranter, who led the restoration of GWR 7819 Hinton Manor among other locos, was an ex Wolverhampton Stafford Road loco man[4]

Proposed Railways between Wolverhampton and Bridgnorth 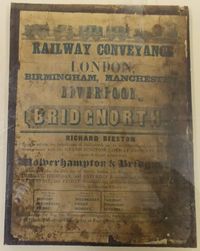 A steam bus at Bridgnorth in November 1904. (Sellick Collection)

Main article: Unsuccessful proposals for railways in the Severn Valley

Although Bridgnorth found itself on a railway line linking Worcester and Shrewsbury, the town is perhaps more naturally allied to Wolverhampton, around 13 miles to the east. A number of proposals were made for railways connecting the two towns, especially during the ‘railway mania’ of the mid-19th century. However the relative position of Wolverhampton’s two stations to the north east of the town centre and Bridgnorth to the south west of it meant most schemes involved approaching Wolverhampton via a junction with one of the existing lines to the south or west, in a similar manner to the Severn Valley Railway at Shrewsbury. Some schemes proposed connections to the Severn Valley Railway north of Bridgnorth, others to the south of it.

Of the various schemes for railways linking the two towns, a total of nine bills were prepared for submission to Parliament. However most were either withdrawn by their sponsors or rejected by Parliament, with only two receiving Royal Assent, neither of which came to fruition. The earliest proposal to be advertised, the Wolverhampton & Bridgenorth (sic) Railway in 1860, was never put to Parliament. The two schemes approved by Parliament were[5]:

The entry for the Severn Valley Railway on Wikipedia makes reference to a proposal prior to World War II to link the Severn Valley Line with the Wombourne Branch, with a section being pegged out and some earthworks carried out immediately south of Crossing Cottage near Eardington. This may refer to the southern end of the GWRGreat Western Railway scheme, although no reference to these workings can be found in the books listed in the Bibliography section.

The majority of schemes were for ‘full blown’ railways. However The Light Railways Act of 1896 simplified the construction of smaller railways; companies could plan a line and, having obtained a Light Railway Order, build and operate it, all without the need for specific legislation in Parliament. The Light Railway Orders would specify limits for axle weights and running speeds to take account of the normally lightly laid lines used on such railways, they could also exempt light railways from some of the requirements of a normal railway in respect of level crossings, signalling and so on (the 1896 Act, with subsequent revisions, provided the Light Railway Orders under which heritage railways such as the SVRSevern Valley Railway would later operate).

Proposed Railways between Wolverhampton and Bewdley

In 1874 a Bill was brought before Parliament for construction of the West Staffordshire Railway, which was to link Wolverhampton directly to the Tenbury and Bewdley Railway at Dowles Bridge with a branch connection to Bewdley. This project had the backing of the LNWRLondon & North Western Railway, who were becoming frustrated by the lack of progress in constructing the Kidderminster Loop between Bewdley and Kidderminster. Although the 1874 Bill failed, it probably brought pressure to bear on the GWRGreat Western Railway to complete the Loop.