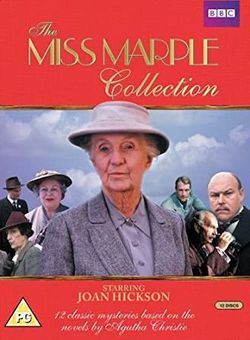 Miss Marple DVD box set
4.50 from Paddington is a detective fiction novel by Agatha Christie, first published in November 1957.[1] Mrs. McGillicuddy, a friend of Miss Marple's, sees a woman being strangled in a train running parallel to her own. When police cannot find a body and doubt the story, Miss Marple enlists professional housekeeper Lucy Eyelesbarrow to go undercover.[2]

The BBC produced a series of twelve made-for-TV films between 1984 and 1992 under the original series title of "Miss Marple", all starring Joan Hickson as Jane Marple. 4:50 from Paddington was the ninth of the series and was first broadcast on 25 February 1987. It also featured Mona Bruce as Mrs. McGillicuddy and Jill Meager as Lucy.

The series is available on BBC DVD as 'The Miss Marple Collection'. The Internet Movie Database lists the individual films under the longer title of 'Agatha Christie's Miss Marple:'[2].

Filming saw the most intense use of the railway since The Seven-Per-Cent Solution, involving multiple locos and use of the re-laid section of the Stourport branch, necessary to film the sequences of parallel running trains.

For the main scene, 80079 was the locomotive on the first train, the “4.33 stopping at all stations to Brackhampton”, while former resident 6960 Raveningham Hall was the locomotive for Mrs. McGillicuddy’s 4.50 train. The two locomotives and their trains were filmed running parallel from the window of Bewdley South signal box and in a head on view of the two smokeboxes. Shots of the crime taking place on the adjacent train were filmed from the window of Mrs McGillicuddy's compartment.

In a second scene, Miss Marple and Mrs McGillicuddy retrace the journey to Brackhampton looking for possible locations where a body might have been thrown from the train. Their train, hauled by 4566, was filmed in the vicinity of Safari Park Curve with Burlish Top visible in the background. Having established that an embankment near 'Rutherford Hall' was the only possible location, they arrive at Brackhampton (Bewdley platform 2), where the two ladies alight from their compartment on GWR 5883 Brake Third.[note 1]

At Miss Marple's request, Lucy Eyelesbarrow secures temporary employment at the Hall to investigate. While searching the embankment for clues, 6960 is briefly seen again at the head of a passing train.

A small anachronism; the film includes several references to the crime taking place on the day of the launch of Sputnik I, dating it to October 1957. After 1951 GWR carriages were renumbered with additional letters to account for the introduction of Mk 1 stock. However the GWRGreat Western Railway carriages seen on the 4.33 at Paddington still have (fictional) GWRGreat Western Railway-style numbers like 6041 rather than the period correct W6041W.

Several other film and television versions of the novel have been produced, among them the 1961 movie "Murder, She Said" starring Margaret Rutherford and a 2004 episode of the ITV series Marple starring Geraldine McEwan.[1]

Both Bewdley and 6960 Raveningham Hall were used again during filming of the eleventh in the series, Miss Marple: They Do It with Mirrors.