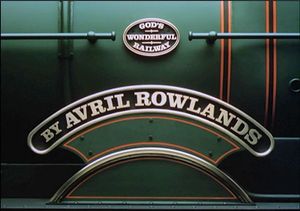 God's Wonderful Railway was a BBC children's drama series of 8 episodes, first broadcast in 1980. Written by Avril Rowlands, it was set specifically on the Severn Valley Railway and filmed almost entirely on location on the railway during 1979.[1] Rowlands was already associated with the SVRSevern Valley Railway, having met her husband Christopher during filming of Carrie's War in November 1973.[2] Christopher Rowlands was also credited as the film editor for God's Wonderful Railway.

The series was divided into three stories, set in different time periods in the history of the railway, through the eyes of a fictional railway family. In each story the main protagonist is a boy in his early to mid-teens, who then reappears as an adult in the following story.

The first story (two episodes) is set during the construction of the line, and its main character is Robbie Grant, a boy who has been brought to the valley because his father is working on the railway as a navvy. Although the Grant family was fictional, the story included characters such as Sir John Fowler and Henry Orlando Bridgeman who were involved in the building of the real Severn Valley Railway, while the plot line in which Robbie is severely injured by a fall of rock is notably similar to several actual accidents which took place during construction.

The Didcot Great Western Society's veteran Wantage Tramway locomotive No 5 "Shannon" was used for filming, being either propelled or hauled into shot as it was not in steam at the time. Its first appearance was as a contractors' locomotive while the line was being built, conveying Sir John FowlerHenry Fowler, Chief Mechanical Engineer (CME) of the Midland Railway 1909-1923, and of the London, Midland and Scottish Railway 1923-1933 and Henry Orlando Bridgman on the footplate to inspect the works.

Shannon's second appearance was as the locomotive in charge of the opening train, where it seen crossing Victoria Bridge southbound both from the bank of the River Severn and from track level. Victoria Bridge had also featured in a scene shortly before the opening of the railway, although the many scenes involving the navvies digging a deep cutting were filmed elsewhere.

'The Permanent Way' included at least one small anachronism; the Arley distant signal is briefly visible on the approach to Victoria Bridge. Such signals were not installed until later in the nineteenth century.

The second story (three episodes) is set in 1906 during the Edwardian era, when the now-elderly Robbie is the signalman at Highley, and his grandson George is about to start work as a porter at the station. Most of the action in 'The Permanent Way' was filmed around Highley station. 4566 served as a locomotive of that era, having been repainted with 'Great Western' on the tank sides for filming.[3] The locomotive appeared both with its own number and as classmate 4506. The "GWRGreat Western Railway carriages" seen were three Ex-Longmoor Saloons which were on loan to the SVRSevern Valley Railway from the Army Trust, having previously being in service at the Longmoor Military Railway. All three were repainted in GWRGreat Western Railway colours for filming purposes with permission of the Army Trust. The carriages were:[4]

A brief clip of 4566 setting off from Arley was later reused by the BBC as a cutaway shot in the 1982 Doctor Who episode 'Black Orchid'.

Fire on the Line

In the final story (three episodes), set in 1939, George is Station Master at Arley; his son Andy has to deal with an evacuee from Birmingham billeted with the family, and becomes suspicious that a spy is trying to destroy Borle Viaduct.

A second series, consisting of a further two stories in five episodes, was scheduled for production in the spring of 1981. The scripts were completed in the summer of 1980 and were to have featured Highley, Hampton Loade and Bridgnorth in particular, together with many of the SVRSevern Valley Railway's engines. The fourth story was set during the closure of the line with Andy, now an engine driver, driving the last train. The final story was set at the start of the SVRSevern Valley Railway's preservation era. The scripts were accepted by the executive producer, however financial difficulties at the BBC led to a late decision to the second series being 'axed'[5].

Novelisations of the three stories were published in separate volumes:

The writer Avril Rowlands held a launch event at Kidderminster on 19 November 2017 to mark the release of the series on DVD.[6] Excerpts from the series were featured in a film show at Kidderminster Railway Museum on 27 January 2018 presented by Avril and Chris Rowlands, who also gave a talk on the work involved in making the series.

In addition to the 8 episodes, the DVD also includes two 'special features' recorded at the time. "On location" is a 25 minute documentary on the making of the series, showing how some of the railway scenes in "Fire on the Line" were filmed and including interviews with various cast members as well as Avril Rowlands and Alun Rees. "Blue Peter" is a 12 minute feature from the long-running children's TV programme which was broadcast the week before God's Wonderful Railway was first aired. Presenter Simon Groom introduced the upcoming series and visited the Severn Valley Railway where he interviewed Alun Rees and travelled on the footplate of Raveningham Hall between Bridgnorth and Arley. His journey was intercut with clips from the series filmed at Highley and Arley.