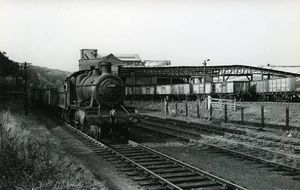 Alveley Sidings were located between Highley and Hampton Loade, and opened on 30 January 1939 to serve Alveley Colliery, which was located across the river. Alveley Halt, which was located at the south (Highley) end of the sidings, was used by miners travelling to the colliery by railway.

The sidings remained in use for coal traffic after the closure of the line between Bewdley and Shrewsbury in 1963, accessed from Bewdley. However, the mine became uneconomical to work and was closed in 1969, with the sidings and line north of Bewdley being closed at the same time, as no other source of traffic remained.

The area at the north (Hampton Loade) end of the sidings is usually referred to on the Railway as Alveley Woods.

A concrete arched bridge was built across the river Severn between 1936 and 1937. Coal was brought from the colliery to the sidings and colliery, initially by a narrow gauge cable-worked tramway across the bridge, and later by an aerial ropeway above it.[1]

The sidings were accessed via two ground frames, Alveley Sidings (North) and Alveley Sidings (South), which were unlocked by the Highley-Hampton Loade token. An intermediate token instrument was provided in a cabin between the two ground frames, with direct telephone lines to Highley Signal Box and Hampton Loade Booking Office, as well as the Worcester Exchange-Bridgnorth Signal Box omnibus line. The intermediate instrument allowed trains to be locked in so that other traffic could pass on the main line whilst shunting took place in the sidings.

The layout on the GWRGreat Western Railway side consisted of a front loop line, with a capacity of 50 wagons, and a number of other sidings and headshunts. Two connections to the private sidings were provided, one at the South end leading to the empty wagon sidings, which held 40 wagons, and another at the North end leading to the loaded wagon sidings, holding 36 wagons. The two rakes of private sidings were connected internally via the coal screens, the large buildings visible in the Sellick photograph, where coal was loaded into the wagons. GWRGreat Western Railway locomotives were used to set down and pick up wagons on these sidings, but were otherwise not allowed in the private sidings.

The sidings were acquired by the SVRSevern Valley Railway as part of the southern section of the line to Foley Park which was purchased from BRBritish Rail or British Railways in December 1972, subject to Light Railway Orders being granted. In November 1973 the sidings was one of the locations used in the television series Carrie's War, with the evacuees' train filmed making several run pasts there. The LROLight Railway Order allowing passenger services between Hampton Loade and Bewdley was eventually granted in May 1974.

A number of scenes featuring static rolling stock were also filmed at the sidings for the television series Survivors, Season 3 episode 3 ‘Law of the Jungle’ (first broadcast 30 March 1977).

The sidings were deemed unsuitable for the storage of SVRSevern Valley Railway stock due to the remoteness of the location and the resultant risk of vandalism.[1] They were therefore eventually dismantled, with much of the rail and point-work later being re-used elsewhere on the line.

In 1996, Country Park Halt was opened on the site. The river bridge linking the main country park on the east bank with the Halt on the SVRSevern Valley Railway was replaced in 2006.[2] It is also used by National Cycle Route 45.

Following extensive flooding in February 2020 land movements were observed in Alveley Woods. As of 2020[update] a drainage scheme is planned, to reduce the amount of water reaching the slip plane and take a degree of pressure off the embankment. A second phase will include a mixture of soil nailing and partial replacement of the embankment material and is likely to take place during 2021.[3] As of August 2020[update] a 5 mph temporary speed restriction is in force in the affected area. Electronic ‘tilt monitoring’ equipment was fitted in February 2021[4].

"Mines and miners" on www.highley.org.uk