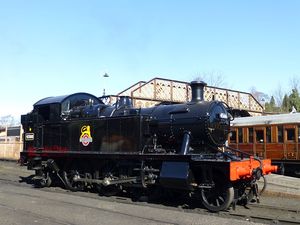 Bob Sim and the late David Rouse considered 4566 to be the most suitable for preservation out of several examples of the type engine at Barry. They wanted to save it and in 1968 started the “45xx Appeal” fund which became the 4566 Group.[1][2] The locomotive arrived on the SVRSevern Valley Railway in August 1970 along with Fruit A 134290 which was recovered while awaiting scrapping at BarryWoodham Brothers Scrapyard, Barry, South Wales. The source of many locomotives now in preservation..[3]

During restoration of the locomotive in the early 1970s, the 4566 Group was closely associated with The 5164 Preservation Group who were restoring Large Prairie 5164, the two groups sharing the same Birmingham Area Fund Raising Officer[4] and organising joint fund raising initiatives under the umbrella of the "4566/5164 Group".[5]

The 4566 Group does not have a website and is not active on social media.