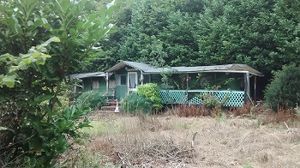 Shack based on railway carriage at Hill Farm.

A notable feature of the Severn Valley landscape is the large number of wooden shacks, particularly on Hill Farm on the east bank and Hawkbatch Farm on the west bank between Northwood Halt and Folly Point with smaller numbers north of Arley at Bank Farm and at Highley.

Most were built in the 1920s and '30s as holiday homes, with more being added in the 1940s until the introduction of the 1947 Town and Country Planning Act. Many are now permanently occupied. There are 380 such shacks in total within the Wyre Forest District.[1]

It is likely that many were originally based on railway carriages, although after several decades of repairs and extensions, none of them retains any outward evidence of this. The last one recognisable as a railway carriage was demolished in early 2017.