The SVRSevern Valley Railway was home to three ex-Longmoor Military Railway saloons between 1971 and 1985. They arrived on loan from the Army's Transport Trust together with LMR 600 Gordon.

Following the closure of the Longmoor Military Railway, a number of items of rolling stock were stored at Liss, adjacent to the Waterloo-Portsmouth main line, during 1971. 600 Gordon and the three saloons were moved from Liss to Didcot on 12-13 September 1971 for a joint GWSGreat Western Society / BRBritish Rail or British Railways Open Day on 18 September. On Monday 20 September, Gordon and the three saloons were moved by rail to Bewdley. Two other carriages were collected on the way, LMS Brake Third 26986 from Worcester and GCR 'Barnum' Third Open 5664 from Kidderminster (then still a BRBritish Rail or British Railways yard).[1]

The three Saloons were originally delivered in LMR blue livery, but during their time at the SVRSevern Valley Railway all were repainted for filming purposes. They appeared in GWRGreat Western Railway livery in God's Wonderful Railway (1980) as pictured below, and were also featured in The Country Diary of an Edwardian Lady (1984) among others. 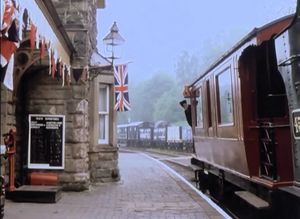 Under the LMSLondon Midland & Scottish Railway the salon was numbered ED33. SVRSevern Valley Railway News, the SVRSevern Valley Railway Stock Book and Heritage Register On-line all suggest that it was also numbered 45021.[4][1] Railway Heritage Register On-line notes that the saloon was sold to the Army in May 1940 for use on the Melbourne Military Railway in Derbyshire, later moving to the Longmoor Military Railway during 1945 for use in the LMR Officers' Special Train. The sale would have allowed the number 45021 to be reused for the LMSLondon Midland & Scottish Railway Bogie District Engineer's Saloon 45021 (later M45021M) built in 1944 and briefly resident on the SVR.

At the LMR the saloon was given the number Army 3005.

After leaving the SVRSevern Valley Railway in 1985, ED33 was used in the Kent and East Sussex Railway's Vintage Train. As of 2021[update] it is awaiting overhaul[2]. 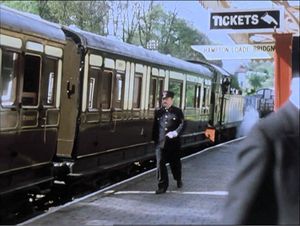 This carriage, one of a pair, was originally built by the South East & Chatham Railway at their Ashford Works in February 1900 and numbered 177. As built it had a luggage compartment with double doors at one end, a large saloon, a vestibule and a short corridor leading to a five seat compartment. It also had a small cubicle with a toilet on one side of the corridor and another with a hand basin opposite. It was intended to be hired by wealthy families travelling to destinations often far from the home railway, but by 1907 had been converted to an invalid saloon.[2]

The saloon was later renumbered 7913 by the Southern Railway, before being sold to the Longmoor Military Railway in 1936 for use in the Officers' train. It was initially numbered 118 before becoming Army 3006.

After leaving the SVRSevern Valley Railway in 1985, restoration as SE&CRSouth Eastern and Chatham Railway 177 began at the Kent and East Sussex Railway in 1992. Now restored, 177 is used in the Railway's Vintage Train[2]. 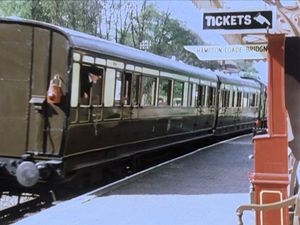 This saloon was built by the LSWRLondon & South Western Railway at Eastleigh in 1910 and was originally numbered 11. It was renumbered 4105 in 1912 and later renumbered 7803 by the Southern Railway before being withdrawn in 1938. It seats 19 people and was originally fitted with gangway connections. These were removed during its time at the Longmoor Military Railway, where it was initially numbers 129 before becoming Army 3007.

As of 2021[update] the KESR website does not list this saloon on their carriages page. Railway Heritage Register Online suggests it is stored, having been in course of restoration since 1999.