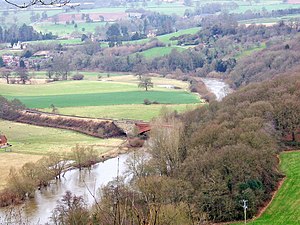 The Severn is the longest river in the UK at around 220 miles, rising at Plynlimon in the Cambrian Mountains of mid-Wales and flowing into the sea via the Bristol Channel[1].

The lower reaches of the Severn are relatively recent in geological terms. The Upper Severn used to flow into a large lake surrounding what is now Shrewsbury; this lake in turn drained into the Trent Basin. When the lake began to melt at the end of the last Ice Age, around 25,000 years ago, the original exit was blocked, probably by ice. The rising melt-water forced a new path through the ridge above Ironbridge, creating what is now the Ironbridge Gorge and the new course of the Lower Severn to the Bristol Channel[2].

The River Severn and the Severn Valley Railway

The railway towns of Shrewsbury and Worcester are both situated on the river, so it was natural that a railway intended to link the two would follow the course of the Severn Valley. At the southern end the Severn Valley Railway began north of Hartlebury, around 2 miles east of the river. It rapidly approached the river at Stourport and from there it hugged the east bank, coming within a few yards at Folly Point, before crossing the river for the only time at Victoria Bridge. Thereafter the railway closely followed the west bank of the Severn past Bridgnorth, and through the Ironbridge Gorge. Once onto the flatter ground beyond Berrington the railway maintained a straighter course towards Shrewsbury while the river meandered, but even then they were rarely more than a mile apart.

The impact of the railway on river traffic 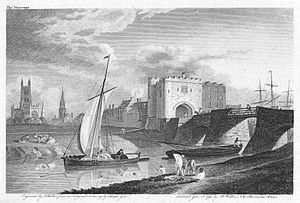 Two trows passing a bridge at Gloucester c1798
Before the building of the Severn Valley Railway, a large proportion of the goods traffic was transported by river barge, known on the Severn and Wye as ‘Trows’. Trows were fitted with a collapsible mast to pass under bridges on the river and were sailed or hauled upstream against the current, depending on weather and river conditions. Much of the traffic created by the iron and pottery industries of the Ironbridge Gorge was moved by trows. In the mid-1750s there were more than 85 barge owners in the area, Bowers Yard being one of the riverside wharves at which they were based.[3] At ports such as Bewdley and Stourport, goods arrived by trow to be distributed around the countryside by packhorse with a return flow leaving in the same manner for the seaports in the west of England. In 1797, 17 trows went weekly between Bewdley and Bristol and 28 between Stourport and Bristol.[4]

The coming of the railway had a significant impact on this traffic. By 1871, less than 10 years after the opening of the Severn Valley Railway, there were just 5 barge owners operating. Barge traffic north of Bridgnorth ended altogether on 25 January 1895 after the barge Harry loaded with firebricks from Ironbridge collided with the bridge at Bridgnorth and sank.[3][5]