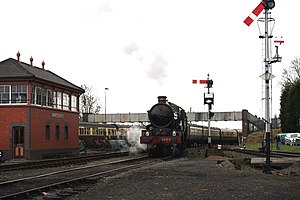 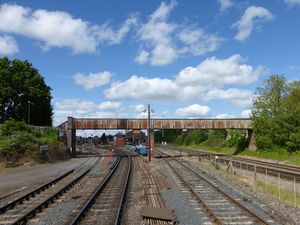 A footbridge has existed at this location since it replaced a level crossing in the 19th century. Earlier bridges were of wooden construction, hence the current bridge is still sometimes referred to locally as 'the wooden bridge'.[1]

Peter Fursdon, a former footplateman at Kidderminster Shed in the 1950s, recalled it as being called the 'Black Bridge'.[2]

In the second photograph, the two lines to the left lead to the platforms at Kidderminster. To the right is the line leading to the connection to the main line and to the Carriage Repair Works. Beyond the fence is the Network Rail main line from Hartlebury to Kidderminster, originally part of the OW&WOxford Worcester and Wolverhampton Railway.

When the SVRSevern Valley Railway first extended to Kidderminster in July 1984, SVR(H) bought from BRBritish Rail or British Railways the last section of the line to Kidderminster from the old boundary at Stourport Road Bridge, but at that stage had only leased the former Comberton Hill Goods Yard on which the station was built. The footbridge marked the boundary between the areas that the SVRSevern Valley Railway owned and leased[3].

Long-mooted plans by Network Rail to replace the footbridge received financial approval in 2021, with works programmed from December until March 2022. The proposed design will be a single-span constructed in ‘weathering steel’ with new abutments at each end. All traces of the existing bridge will disappear including the central brick pier.[4] The SVRSevern Valley Railway's aspiration to extend the bridge to give access from the station to the turntable will remain an aspiration, due to a lack of funds.