From SVR Wiki
(Redirected from 34027)
Jump to: navigation, search 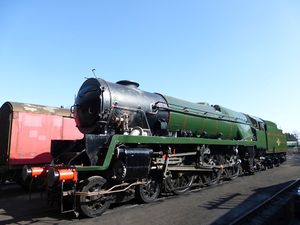 34027 Taw Valley is a SRSouthern Railway West Country Class 4-6-2 'PacificLocomotive with a 4-6-2 wheel configuration' designed by Oliver (O.V.S.) BulleidOliver Vaughan Snell Bulleid, Chief Mechanical Engineer (CME) of the Southern Railway 1937-1948, CMEChief Mechanical Engineer of the Southern Railway (SRSouthern Railway). Lighter in weight than their sister locomotives, the Merchant Navy class, they could be used on a wide variety of routes including in the south-west of England and the Kent coast. They were a mixed-traffic design, being used for both passenger and freight trains, and were rated 7P6F by British Railways. Originally built with innovative features including air-smoothed casings and chainAs a unit of measurement, 22 yards or 1/80th of a mile-driven valve gear, many of the locomotives including 34027 were rebuilt by British Railways in the late 1950s.

Taw Valley was built at the SRSouthern Railway’s Brighton Works and named after a river in Devon. The locomotive entered service in April 1946 as SRSouthern Railway number 21C127. It was originally allocated to Ramsgate where it worked London to Kent expresses. In 1947 Taw Valley moved to Exmouth Junction, working mainly in Devon and Cornwall. Here the locomotive would have hauled named trains such as the ‘AtlanticLocomotive with a 4-4-0 wheel configuration Coast Express’ and ‘Devon Belle’. Taw Valley was re-numbered 34027 by BRBritish Rail or British Railways in April 1948 as part of the re-numbering programme following nationalisation.[1]

In September 1957 Taw Valley became the second member of the class to be rebuilt at BRBritish Rail or British Railways's works at Eastleigh to a more conventional design set out by Ron Jarvis,[note 1] who had already been responsible for similar rebuilds to the Merchant Navy class. Following this rebuild the locomotive was allocated to the Bricklayers Arms depot in south-east London, working services to Kent. After the lines were electrified, 34027 moved to Brighton in May 1961 to work commuter services from there. Following transfer to Salisbury in September 1963, Taw Valley was withdrawn from service by BRBritish Rail or British Railways in August 1964[2] and towed to Barry Scrapyard, arriving there in December 1964[3].

The locomotive arrived by road at Bridgnorth on 18 August 1985,[2] becoming the SVRSevern Valley Railway's first Southern Region pacific (an earlier attempt to acquire classmate 34016 Bodmin for the railway having been thwarted). At the time the tender was complete, everything above the frame level having been newly built, while the boiler was at the re-tubing stage.[4] Part of the restoration involved forging and machining new connecting rods, the originals having long since vanished. A steam test was successfully completed in April 1987,[5] and restoration was completed in October 1987 when trial running began; the locomotive also worked several trains with fare paying passengers on board. Final painting began in February 1988, and the locomotive entered service in June 1988 with a formal re-naming ceremony taking place on 4 June[6]. 34027 then worked every weekend until the winter season to allow as many of the footplate staff as possible to experience the new locomotive; highlights included lifting 16 coaches out of Bridgnorth with no difficulty during the Autumn Steam Gala. In spring 1981 34027 was examined by BRBritish Rail or British Railways inspectors and declared mechanically fit for main line working apart from the tender wheels which were deemed to be below scrapping size.[7]

Following a loaded test run from Derby to Sheffield and back on 12 May 1989, Taw Valley was then rostered for a summer season of excursions on the 'North Wales Coast Express' between Crewe and Holyhead. During a press run from Crewe on 20 June, the locomotive suffered a slightly bent radius rod. After this was disconnected the locomotive completed the journey at a modest 50 mph. Repairs were completed within a week and the locomotive went on to produce a series of excellent performances Taw Valley returned in time for the September Autumn Steam Gala but was then requested at short notice by BRBritish Rail or British Railways to run the Marylebone steam programme from early November until the end of March 1990.[8]

Taw Valley returned in time to take part in the April 1990 Spring Steam Gala. Sunday 13 May saw the normal summertime Table C timetable in use, requiring 5 steam locomotives. Only later was it pointed out that the SVRSevern Valley Railway had unknowingly achieved a ‘full house’ by rostering GWR 4566, SRSouthern Railway 34027 Taw Valley, LMS 46443, LNER 3442 The Great Marquess and BR Standard 75069 on the same day. Another summer season of 'North Wales Coast Express followed. On return, a weep was found on one of the thermic syphons which was repaired in time for the Autumn Steam Gala. The locomotive also worked the 1990 Santa Services, although managing to run out of coal on the first weekend.[9]

Note: The 1991 and 1992 mileage figures appear not to include main line working. Mileage post-1992 was not published in SVRSevern Valley Railway News.

Following overhaul, Taw Valley underwent a test run on the main line in late 1996, during which the middle cylinder liner suffered damage. Repairs required the removal of the old liner, re-boring of the cylinder block, and installing and re-boring a new liner.[14] The new cylinder liner was machined at the SVRSevern Valley Railway as a contract job during 1998.[15] By 2000, Taw Valley was again working on the main line, notably appearing around the country that year in maroon livery as 'Hogwarts Express' to publicise the Harry Potter books which were then being published.

In March 2002 Taw Valley appeared at the Spring Steam Gala running as 34045 Ottery St. Mary. The locomotive then spent nearly two months during the summer in the boiler shop in a semi stripped-down state with the cab removed to enable two thirds of the boiler stays to be replaced. Despite a major effort, the Locomotive Department were just unable to complete the work in time for the Autumn Steam Gala.[17].

Main line running with periodic returns to the SVRSevern Valley Railway continued until May 2005. This included a number of rail tours in which the locomotive ran as sister locomotive 34045 Ottery St Mary. In March 2004 Taw Valley made a 2-week visit to the West Somerset Railway during which during which it was successively renumbered and re-named 34022 Exmoor and 34046 Braunton.[18] The locomotive also appeared in the Autumn Steam Gala of 2005 as 34036 Westward Ho, the last gala appearance before going out of ticket.[19].

Mileage pre-2001 and post 2004 was not published in SVRSevern Valley Railway News.

As noted above, Taw Valley spent considerable periods of time on the main line during both her first and second boiler tickets. The table below has been compiled from various sources including Six Bells Junction, UK Steam and SVRSevern Valley Railway News. However it may not be complete.

Taw Valley’s heavy overhaul had begun by the spring of 2006, with the locomotive being fully stripped down within eight weeks.[20]. The overhaul required a new left-hand cylinder to be cast.[21] Work on the boiler at Pridham's in Devon involved building an almost complete inner firebox and replacing most of the outer box.[22] The overhaul continued to make steady progress and was eventually completed in time for Taw Valley to re-enter service on 16 May 2015, hauling an incoming "British Pullman" rail tour consisting of 12 coaches and a Class 67 diesel from Bewdley to Bridgnorth,[23] and an SVRSevern Valley Railway service from Bridgnorth to Kidderminster. Taw Valley is the only SVRSevern Valley Railway steam locomotive, apart from 600 Gordon, equipped to work with air braked rolling stock. However the locomotive is no longer registered to work on the main line (the owner sold support coach 35479 in 2015 around the time the locomotive re-entered service). It has also not appeared at another railway since that time.

Taw Valley is currently in BRBritish Rail or British Railways Green livery featuring the ‘Late Crest’. The coat of arms on her name plate were not carried in service. At the end of 2019, 34027 had recorded a total of 82,767 miles in preservation on the SVRSevern Valley Railway. The reported total may include mileage on the main line and on hire to other railways[24].