From SVR Wiki
(Redirected from 80079)
Jump to: navigation, search
80079 is a BRBritish Rail or British Railways Standard Class 4 2-6-4T tank engine designed by R.A. RiddlesRobert Arthur "Robin" Riddles, Member of the Railway Executive for Mechanical and Electrical Engineering responsible for the design of the British Rail Standard Class locomotives. The Class 4 tank engine was derived from the ex-LMSLondon Midland & Scottish Railway FairburnCharles Edward Fairburn, Chief Mechanical Engineer (CME) of the London, Midland and Scottish Railway 1944-1945 2-6-4T, and was used mainly on commuter and outer suburban services. A total of 155 were built, of which 15 have survived into preservation.

80079 was built in 1954 at BRBritish Rail or British Railways's Brighton works and entered service at Plaistow in March of that year, before moving to Tilbury a month later.[1] From there, 80079 mainly worked passenger services between London Fenchurch Street and Tilbury, Southend and Shoeburyness.[2] While hauling a passenger train on 30 January 1958, 80079 overran signals in thick fog and was in a rear-end collision with another passenger train at Dagenham, Essex. Ten people were killed and 89 were injured.[3][4]

After repair, 80079 continued in service at Tilbury until rendered redundant by electrification of those lines. A number of the 2-6-4T class were then transferred to the Western Region, with 80079 moving to the Croes Newydd shed, Wrexham in July 1962, from where it would regularly have worked services to Shrewsbury. John Stretton captions an image of 80079 emerging from Bridgnorth Tunnel on 30 August 1962 on the 7.27p.m. Bridgnorth to Shrewsbury, a rarity of a now SVRSevern Valley Railway-based loco that ran on the branch in service.[5] The locomotive was withdrawn from Croes Newydd in July 1965 and taken to Barry Scrapyard, arriving in January 1966.[1][6] 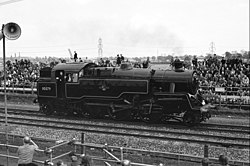 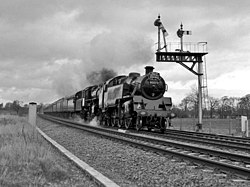 Restoration began immediately at Bridgnorth. The locomotive was steamed in early 1977, including a test run to Hampton Loade, and entered revenue earning service on 17 April 1977. It quickly gained a reputation as a strong free-steaming engine,[9] and despite a limited water capacity, went on to make an impressive number of appearances on the main line. A number of these were in tandem with fellow classmate 80098. A list of these is set out below.

In December 1981 filming took place for an episode of ITV’s Game for a Laugh. This featured musician and entertainer Joe Brown firing 80079, a job he previously did for BRBritish Rail or British Railways while a fireman at Plaistow.

In early 1987 work was carried out on the boiler in an attempt to extend the 'ten year ticket' for a further three years.[10] This was partially achieved, with 80079 being withdrawn due to loose/thin flue tube ends in early 1989.[11] Apart from the boiler, the locomotive was considered in good condition mechanically, so when an overhaul began in 1990 the work mainly comprised new bunker platework, new pipework, reconditioned cab fittings and repairs to the tanks.[12] Some attention was also required to the frame.[13] In spring 1991 an SVRA Birmingham Branch raffle helped raise funds for the boiler work.[14]

80079 returned to service in May 1993, making an early appearance on the Central Wales main line before spending the summer at the Llangollen Railway.[15] During the second ticket the locomotive was a consistent performer and in 2000 recorded 12,849 miles, the highest mileage of any SVRSevern Valley Railway locomotive in any single year between 1967 and 2004. The locomotive finally succumbed to tube failure in summer 2002, shortly before the 'ten year certificate' expiry date.[16]

80079 has recorded 103,509 miles in preservation. The mileage by year as reported in SVRSevern Valley Railway News is as follows:[17]

After cosmetic restoration at Bridgnorth, 80079 was temporarily placed on display at the NRM Shildon in March 2005.[18]. It was then one of the first batch of locomotives to be displayed in The Engine House at opening in 2008. As of 2022[update] it remains on display there. 80079 is owned by The Passenger Tank Fund.

Railway Herald magazine reported on 7 November 2011 that a special meeting of the Passenger Tank Fund had been arranged for 30 October 2011 to discuss and vote on a proposed sale of the locomotive to Mr Jeremy Hosking.[19] No such sale took place.