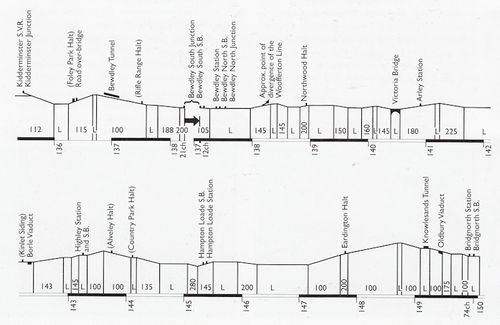 The profile shows the average gradient in each section (the vertical scale is exaggerated), thus on leaving Kidderminster the line initially goes downhill with a gradient of 1 in 112. ‘L’ indicates level. According to the GWRGreat Western Railway gradient profiles, the steepest gradient on both the orignal Severn Valley Railway and the Loop line did not exceed an average of 1 in 100 in any section. The horizontal scale includes the mileages (see below).

Gradient posts showing changes in gradient can be seen at the lineside. The design varies, but generally follows the principle of this prominent example near Northwood Halt.

The location of stations, bridges and other structures on the railway network are measured from a datum point (normally a major terminus). For the majority of the railways associated with the SVRSevern Valley Railway the datum point was London Paddington (the exact zero point being the Paddington Suburban Tunnel boundary with the Metropolitan Railway). The individual routes used to reach those locations are identified by Engineer's Line References (ELRs).

The SVRSevern Valley Railway's Kidderminster Town station is measured as 135 miles 40 chainsAs a unit of measurement, 22 yards or 1/80th of a mile (exactly 135½ miles) from London. A milepost showing this distance is included in the gallery below.

The ELREngineer's Line Reference, East Lancashire Railway for the Severn Valley Branch began in the south at Hartlebury Junction and ended at the junction with the Shrewsbury and Hereford Line (SHL) near Sutton Bridge Junction. Shrewsbury was deemed to be the principal terminus on the S&H, with mileages measured southwards towards Hereford (see map of SHL below).

The section most relevant to the Severn Valley branch is shown below.

The original 1874 Loop Line specification and contract quoted mileages from Bewdley South junction towards Kidderminster. Drawings of the main items of infrastructure were described as follows:

Early OS maps show the locations of mileposts on the loop line which appear to reflect this method of calculation. Mileposts appear just east of Rifle Range Halt (see map below), just west of Stourport Road Bridge (the location of Foley Park Halt), and just south of Kidderminster Junction (see map below). This discrepancy can be accounted for if the earlier mileages were instead based on a reversal at Bewdley and then travelling towards Kidderminster, ie:

Early railway fares were set by distance, therefore it was necessary for railway companies to provide their passengers with a means of determining the distance travelled. The Railways Clauses Consolidation Act 1845 Section 94 stated "The company shall cause the length of the railway to be measured, and milestones, posts, or other conspicuous objects to be set up and maintained along the whole line thereof, at the distance of one quarter of a mile from each other, with numbers or marks inscribed thereon denoting such distances.[1]

Mileposts showing the distance from London Paddington, as measured above, can be seen at the lineside. In the second example shown, the distance just south of Arley Station is 140¾ miles (the vertical bars below the number show the number of quarter miles). One milepost is situated at the foot of Highley Signal Box, showing that it is exactly 143¼ miles from Paddington.

The locations of the principal mileposts were often shown on early Ordnance Survey maps, such as this example from 1903 showing the presence of mileposts (MP) at Kidderminster Junction on both branches of the junction.

Although the mileposts seen today were re-created in the modern era, they closely follow the historical design. The remains of this original milepost can still be seen next to the trackbed between Ironbridge and Buildwas.

In addition to the 'discontinuity' in the mileage at Bewdley South Junction referred to above, the present day SVRSevern Valley Railway being situated on three different ELRs gives rise to some other apparent oddities. Leaving Kidderminster, the mileage initially decreases as you pass the first milepost by the carriage shed but then increases again as you continue (due to setting off towards London but then curving away from it). Reaching Kidderminster Junction, this is two different distances from London, depending on whether you are on the OWWOxford Worcester and Wolverhampton Railway line or the Severn Valley Branch (due to the latter being approached by the reversal point). Finally, on Safari Park Curve you pass milepost 137¾, and a short time later you enter Bewdley Station passing another milepost 137¾ (the former being reached via the Loop and the latter direct via Hartlebury.

Evidence of another measurement system used for operational purposes can also be seen on the SVRSevern Valley Railway. The distances have been measured from Kidderminster in kilometres, with a small marker tag attached to the web of the rail every 100 metres. The locations of these have been highlighted by white paint on the chair or sleeper adjacent to the marker. Examples can be clearly seen from the platform at Bewdley (5.700) and near the Highley cattle dock (15.100).