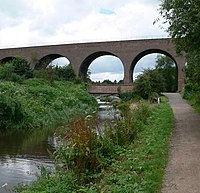 Falling Sands Viaduct (Bridge 3) was completed in 1877 as part of the Kidderminster Loop Line. It carries the railway across the Staffordshire & Worcestershire Canal Conservation Area and 64 feet above the River Stour, about a mile from Kidderminster. It is built of red brick and is 132 yards in length, with seven arches of 46ft span.[1] The Viaduct was also numbered as Bridge 3 during the BRBritish Rail or British Railways era; the BRBritish Rail or British Railways-era numbering plate, which may still be seen on the northern parapet, gives its location as 135 miles 78 chains.

After crossing the viaduct when travelling toward Bewdley, the area of land on the left of the line was the site of the former British Sugar Corporation's Foley Park Factory. Freight services between the factory and Kidderminster continued after 1970, finally ending with the factory’s closure in late 1982.[4] The last visible structures on the site, two large silos, were demolished in 2012 and the area is now being developed for housing.

The line between Foley Park and Kidderminster, including the Viaduct, was acquired from BRBritish Rail or British Railways in 1984, with passenger services commencing on 30 July 1984.

By around 2015 it had been determined that extensive repairs were needed to secure the Viaduct. Water had seeped into the structure causing cracks and erosion, and a speed restriction became necessary.

On 6 September 2016 the HLFHeritage Lottery Fund (National Lottery Heritage Fund from 2019) rejected a bid from the Severn Valley Railway Charitable Trust Ltd for £902,200 but "agreed the project as a medium priority for support" and "noted that a strengthened resubmission that addressed [its] concerns would be welcomed." The concerns were "that community engagement and interpretation plans were not sufficiently strong."[5]

In June 2017 the Trust secured £71,800 of HLFHeritage Lottery Fund (National Lottery Heritage Fund from 2019) financial backing to develop a bid seeking £927,000 from the HLFHeritage Lottery Fund (National Lottery Heritage Fund from 2019) for a large part of the quoted £1.324 million total project cost. The SVRSevern Valley Railway met the challenge of raising matched funding of £397,000 (originally £275,000) for which the Trust co-ordinated efforts through a campaign entitled "Helping hands for Falling Sands". Preliminary structural investigations in Summer 2018 had revealed two gas mains, one live, which increased the cost and SVRSevern Valley Railway's contribution.

The Trust submitted its bid on 26 October 2018 and on 25 March 2019 announced the award of a further £853,800 grant from The National Lottery Heritage Fund which together with the earlier grant took the total amount of its funding to £925,600. The grant, along with other funds raised, was used to restore the Viaduct and to launch a programme of community engagement and exhibitions that explore the Railway’s early history. In August 2019 the Trust unveiled a large donation wall at The Engine House acknowledging the individuals, organisations and businesses who had donated to the "Helping Hands for Falling Sands" appeal, and in 2020 an exhibition was held there. LMS six-wheel Passenger Brake 2886 was adapted to host a mobile exhibition.

The timing was chosen to make the most of the annual six week shutdown period, with the work to be fully completed by the autumn in two phases.[6]. The first stage necessitated closure of the railway between Bewdley and Kidderminster from the end of Christmas services with the line reopening at Easter. Phase 2 from May 2020 would involve replacing damaged brickwork and corbelling, and repointing throughout.[7][8][9][10]

Repair work began at the very end of December 2019 with the lifting of the track by a team of volunteers and paid staff. External contractors then removed the ballast and fill from the viaduct. After the infill was removed, the contractors improved the drainage channels and added a waterproof membrane, before putting everything back together. These works were essentially complete when interrupted in March by coronavirus disease (COVID-19), although track was not joined and signalling not yet in place.

While the railway remained closed, the contractors began work on stage 2. Easing of lockdown restrictions allowed work on stage 1 to restart in the week of 19 June, with laying of rail completed on 25 June. The following day BR Class 50 50035 Ark Royal became the first train to cross the viaduct since December while delivering S&TSignals & Telegraph equipment for the new Foley Park ground frame.[11] Discovery of roosting bats held up repairs while a licence was obtained from Natural England to allow work to be carried out.[11] Work recommenced in August[12].