Goods traffic on the SVR 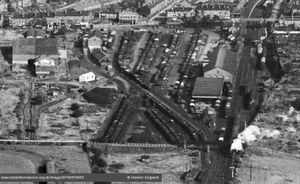 During its 101 year history the Severn Valley branch was never financially successful.[1] GWR Traffic statistics for stations on the branch show that between 1903 and 1923, passengers only accounted for around 20% of the total revenue, with around 80% of the revenue arising from freight traffic. After that time passenger numbers declined, and by 1938 revenue from passenger traffic accounted for little more than 10% of the total, with freight traffic nearing 90%.

Freight traffic therefore played a major role in the history of the branch. It included coal traffic from the Collieries served by the Severn Valley Railway, goods traffic to and from the industries of the Ironbridge Gorge, and other goods traffic, mainly agricultural. This article is an attempt to piece together information on the quantity and variety of goods carried on the SVRSevern Valley Railway during that time.

After the Stourport station canal basin and interchange sidings opened in the 1880s, coal was moved by rail from Highley to the canal basin and from there to the nearby ironworks at Wilden and Stourvale via the Staffordshire & Worcestershire Canal.[2][3]

A branch line from Stourport Station to the power station opened in 1940; thereafter coal could be brought in by rail. Alveley coal trains required the use of a tender engine; initially a Kidderminster based LNER J25 during the War years and thereafter an ex-GWRGreat Western Railway 43xx MogulLocomotive with a 2-6-0 wheel configuration.[4] During the 1950s a daily morning train would work empty from Stourport Power Station to Alveley Sidings and return fully loaded, with another round trip in the afternoon. The normal motive power at the time was GWRGreat Western Railway 6382 or another MogulLocomotive with a 2-6-0 wheel configuration.[5]

Slack trains would also arrive from the LMSLondon Midland & Scottish Railway area via Great Bridge to Hartlebury from where they would reverse to Stourport, returning empty. The trains consisted of around 36 wagons with LMSLondon Midland & Scottish Railway brake vans at each end. These were normally worked by a GWR 56xx 0-6-2T, generally no. 6665 or 6684 from Stourbridge. In 1956 Kidderminster was allocated its own 56xxA GWR 5600 Class 0-6-2T engine, no. 6679[4].

A brief glimpse of a diesel hauled coal train can be seen in the background at the end of this Media Archive for Central England film on the opening of Trimpley Waterworks in 1967. www.macearchive.org

A daily goods train would work in each direction on the Severn Valley branch.[note 1] Tony Barfield, a fireman at Kidderminster in the mid-1950s, described the northbound operation thus:

The Salop Goods was a daily through goods train from Hartlebury to Shrewsbury, calling at the stations and goods yards along the branch, picking up and putting off odd wagons, re-arranging coal wagons and cattle trucks at small yards such as Arley or Hampton Loade, sometimes doing considerable shunting at Bewdley or Bridgnorth. Loads would vary from day to day. A hard struggle to Bridgnorth with a mixed train of coal, cattle trucks, pit props, fruit vans, might be compensated by a non-stop run back with perhaps only half a dozen empties. The Salop Goods was usually worked by tender locomotives except at boiler washouts or repairs when a 41xx class 2-6-2 deputised. Moguls such as 6382, 5355, 6314, 6388 all worked at times but generally the train was worked by CollettCharles Benjamin Collett, Chief Mechanical Engineer (CME) of the Great Western Railway 1922-1941 0-6-0 no 2207.[5]

The BR(W) 1948 working timetable gives an example of this working, which began with a 9.30am departure from Hartlebury and ended at Shrewsbury Coton Hill yard at 6.58pm. The stop at Cressage has a note in the timetable 'To deal with Cattle traffic and perform S.T. work only', the S.T. referring to the Station Truck forming part of the train.

The opening of the West Midlands Sugar Co (later British Sugar Corporation) factory at Foley Park sidings in 1925 began sugar beet trains to Foley Park, which ran until closure of the factory in 1982. The processing season ran from mid-September to mid-January, during which time up to four complete trains per day would arrive at Kidderminster. Tripping these loads from Kidderminster yard along the Loop line required a locomotive to be available 24 hours per day.[6]

Outside the regular beet season, the factory was kept supplied by train loads of sugar cane from Newport or Cardiff docks. Tank loads of molasses, a by-product of the refining process, were shipped from the factory to Avonmouth docks[7].

A number of the stations on the branch had 'cattle docks' from which loaded cattle wagons could be collected. The 1936 GWRGreat Western Railway 'General Appendix to the Rule Book' stated that "In dealing with Live Stock, including horses, cattle, sheep, pigs and goats, care and patience must be shown, not only in loading and unloading, but also in their treatment during transit, and in or about the yards, pens, sheds and stations, in order to avoid fright or injury, and consequent suffering on the part of the animals."[8]

Post-War, cattle trains ran on market days as required from Bridgnorth on alternate Mondays and Tenbury on alternate Tuesdays to Bordesley via Kidderminster[9]

A number of the brick and tile works in the Ironbridge Gorge had their own private sidings or made use of the extensive sidings at Jackfield. Maw and Co's factory opened in 1883 and became the largest tile works in the world, employing almost 400 people and producing 20 million tiles annually. They had their own privately owned railway wagons and for many years made extensive use of the Severn Valley Branch to transport almost the whole of the factory's output. The 1922 working timetable showed that it was served by the DownIn reference to the direction of travel means away from the major terminus (i.e. towards Bridgnorth on the present day SVR) goods train from Hartlebury (the 'Salop Goods') arriving at 4.13pm and the UpIn reference to the direction of travel means towards the major terminus (i.e. towards Kidderminster on the present day SVR) goods from Shrewsbury arriving at 3.45pm. The siding continued in use until 1959.

The Bower Yard Lime Kilns were located north of Ironbridge. For some years the GWRGreat Western Railway brought coal to the kilns and transported the lime to various areas of the country.

There were a number of private sidings including H. Whitehouse's sidings at Kidderminster and Wilden, and those accessed via the Foley Park sidings.
When Kellett's Gravel pit at Foley Park closed in 1904, the sale included 51 ballast wagons and a 5000 ton stockpile, suggesting that many thousands of tons of ballast had been carried on the SVRSevern Valley Railway on its way to Frankley, Birmingham, in the two and a half years the pit was open.[10]

Examples of references to goods traffic

Some newspaper stories make passing reference to the type and quantity of goods carried on the SVRSevern Valley Railway.

A selection of consignment notes from Bewdley Station have been preserved and give an example of the type of parcels and small loads being handled at the station in 1965.

Other consignment notes and way bills

Since preservation, the SVRSevern Valley Railway has seen occasional revenue-earning freight services, including the following: