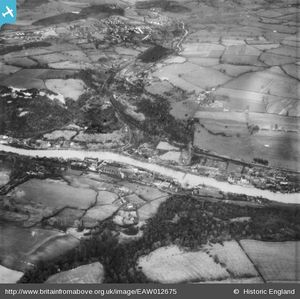 An aerial view of Jackfield in 1948, with Maw and Co's factory extending across most of the image on the near side of the River Severn. Jackfield Halt was located at the left (west) end of the factory at this date. Image from Britain from Above

Maw and Company, often referred to as Maw & Co., was a company specialising in the manufacture of decorative floor tiles, later expanding to other ceramic wares. The company had a private siding on the Severn Valley Branch serving their factory at Jackfield.

The company was formed in Worcester in 1850, and in 1862 moved to a new factory in Broseley in the Ironbridge Gorge[1], providing a significant portion of the traffic at Ironbridge and Broseley station. The company quickly outgrew the cramped Ironbridge site and a decision was taken to open a new purpose-built factory downriver at Jackfield, home to several other tile factories including the nearby Craven Dunnill tile works.

The new factory was named the Benthall Encaustic Tile Works, the term 'encaustic' referring to the process of decorating by burning in colours as an inlay, especially using coloured clays or pigments mixed with hot wax. It was built on the site of an existing small brickworks lying between the Severn Valley Branch to the west and the River Severn to the east near "Tuckies" (also known as "The Tuckies"), a small hamlet to the south east of Jackfield. After opening in 1883, the factory became the largest tile works in the world, employing almost 400 people and producing 20 million tiles annually. Tiles were exported across the British Empire via the Severn Valley railway, to locations including the Maharaja's Palace, Mysore, India; St. Paul's Cathedral, Melbourne; and the Bank of South Africa, Johannesburg.[2]

The area between Maw and Co's factory and Jackfield lies on the Doughty Fault, an area of unstable ground made worse by the history of clay mining in the area.[3] The susceptibility of the land to slipping became a constant expense to both the Great Western Railway and other local businesses. In 1882, Maw & Co undertook to sink several old boiler barrels or 'shells', some possibly from GWRGreat Western Railway locomotives, vertically into the ground and fill them with concrete in an attempt to stabilise the ground. The process was described in an article in "The Engineer", December 1882, a copy of which may be seen on a Telford and Wrekin Council information board at the site of the slip[4]. A significant further slip in 1952 resulted in the relocation of Jackfield Halt. Telford & Wrekin Council completed a three year land stabilisation scheme in October 2016 which substantially landscaped the area,[5] although the remains of several of the shells are still present in the vicinity.

Building restrictions in the decades following World War II and the closure of the Severn Valley Branch in the 1960s were both detrimental for tile production in Jackfield, leading to the eventual closure of the Tile Works in January 1970. Two-thirds of the site was demolished between 1974 and 1977. In the early 1980s, Telford Development Corporation converted some of the remaining buildings into small business units and others into flats. The site was acquired by its present owners Maws Craft Centre (Jackfield) Limited in 1988, and now houses a collection of art, craft and design studios[6].

The private siding, which was situated to the east of the line and facing Ironbridge, was opened in 1877 at Maw & Co's expense, with approval for its use being granted by Major Marindin of the Board of Trade.[7] The 1883 OS Map below, surveyed in 1881-82 and pre-dating of construction of the Benthall Encaustic Tile Works, shows the siding serving the small brickworks.[note 1]

When the siding first opened, a small McKenzie and Holland wooden signal box controlled access to it.[8] Following the opening of the Tile Works in 1883, Maw's paid the GWRGreat Western Railway £130 to provide an additional siding in 1890.[7] The signal box was demoted to ground frame status in 1893.[8] The layout of the Tile Works with the enlarged siding can be seen on the 1902 OS map. The map shows that the original brickworks building was incorporated into the larger Tile Works, its position being identifiable by the small adjoining overbridge crossing the line. The overbridge carried the Company's tramway which gave access to the clay pits on the west side of the line.[9]

The first photograph below shows the Tile Works shortly after opening in 1883. The rake of wagons is standing in part of the private siding next to the Severn Valley Branch, which can be seen passing between the wagons and the small signal box that controlled access to the siding. Other wagons are visible in another part of the siding next to the factory, and the tramway overbridge can be seen on the extreme right. The second photograph shows the factory office building, now the entrance to Maws Craft Centre, in 2016. The main road passing off to the right runs through the area occupied by private siding while the trackbed of the former Severn Valley Branch itself, which is further to the right out of view, is now part of the Severn Valley Way footpath and National Cycle Route 45.

The photograph below of unknown date shows the extent of Maw & Co's Tile Works, with the office building pictured above in the distance beyond the bottle kilns. Another rake of wagons can be seen standing in the private siding. The road underbridge in the foreground which led to the hamlet of Tuckies still stands, and now carries the Severn Valley Way footpath and National Cycle Route 45 over the road.

From 1934 the works was served by Jackfield Halt, which was initially situated west of the siding but later moved to a new location the east of it following the 1952 landslip. The new 1954 location of the Halt was next to the bridge.

Maw & Co has their own privately owned railway wagons and for many years made extensive use of the Severn Valley Branch to transport almost the whole of the factory's output. The 1922 working timetable showed that it was served by the daily DownIn reference to the direction of travel means away from the major terminus (i.e. towards Bridgnorth on the present day SVR) Hartlebury goods train arriving at 4.13pm and the UpIn reference to the direction of travel means towards the major terminus (i.e. towards Kidderminster on the present day SVR) Shrewsbury Goods arriving at 3.45pm. The former signal box was replaced by a standard ground frame in 1945, but the siding continued in use and was one of the last in the area to remain open, finally being closed on 18 October 1959[2][8].