The disused line to Billingsley Colliery, which terminated at Kinlet Sidings, in 1963 (Sellick Collection)

A signal box situated between Arley and Highley, controlling access to the exchange sidings for Billingsley and Kinlet Collieries. 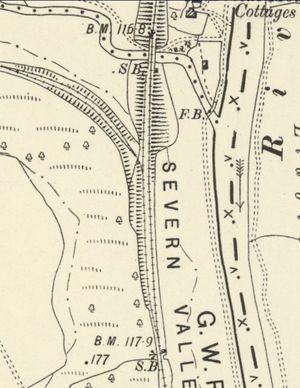 The New Billingsley Colliery Company applied to the GWRGreat Western Railway for siding accommodation in 1911. This was provided at the point where Kinlet traffic was already dealt with. The extension of the colliery railway to the Billingsley colliery opened in 1913 and was 3½ miles in length, with a reversal one mile from the colliery[1].

To handle the increased traffic from both collieries, a new signal box was opened in December 1913. Unlike all other signal boxes on the line, it was able to switch out, presumably only being open when required. The Signalling Record Society holds a document (SRS200701006) dated 16/08/1911, which references the new connection to Billingsley Colliery, including the provision of the new signal box. There are records of new tablet machines being provided in Arley and Highley signalboxes, used for long section working (short section working was by staff). The tablet machines on the long section were later replaced by token instruments. The box is recorded by the SRS as having 38 levers, making it one of the largest on the SVRSevern Valley Railway. Of these, 32 were operational and 6 were spare[2]. Presumably the existing ground frames were removed when the signal box was commissioned.

Billingsley Colliery closed in 1921, although use of the line by a nearby land-sale wharf continued. Kinlet Colliery closed in 1937 when production moved to Alveley, following which both colliery lines were removed at some time before 1941. The Highley Mining Company established a wagon repair works at the location, so when the signal box was closed in March 1943, it was replaced by two ground frames, once again referred to as Kinlet Sidings North ground frame and Kinlet Sidings South ground frame. These were locked by the electric train token for the Arley-Highley section. There was also an intermediate token machine provided in a cabin in the middle of the loop.[1] Working Time Tables from 1948, 1949 and 1960 refer to these arrangements.