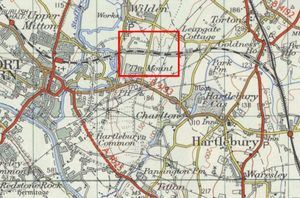 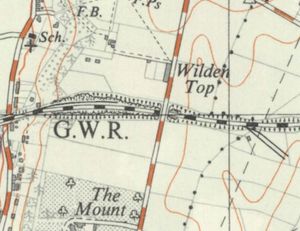 OS Map Wilden 1951, with the Sand Siding north of the line

Wilden Sand Siding served a sand quarry at Wilden, on the Stourport Branch between Hartlebury and Stourport

The Severn Valley Railway ran through a sandstone ridge at Wilden Top, around ¾ mile from Stourport. The railway could have passed through this via a tunnel as elsewhere on the line, but a large amount of spoil was required for a nearby embankment. As a result one of the largest cuttings on the line was constructed, around a third of a mile long and up to 60 ft deep. Unusually, a tunnel was first driven and laid with rails, then the ground above was dug away and dropped down shafts into wagons.[1]

A large sand quarry was situated north of the cutting between the Wilden Lane Underbridge and Wilden Top Road Overbridge. Access to the cutting was controlled by a ground frame at the western end, locked by the section token. The extract below from the OS map of 1927, surveyed in 1925, shows the size and extent of the siding which measured around 600ft in length. The date when the siding was commissioned is not recorded, although it does not appear on the previous OS map published in 1902. After the quarry closed, the siding was used to store coal wagons waiting to enter Stourport Power Station[2].