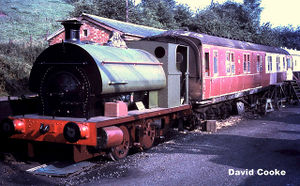 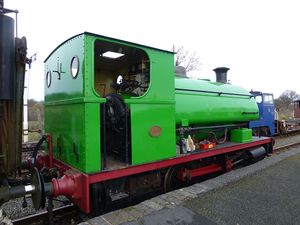 This 0-4-0ST locomotive was built as Works No 1738 of 1928 by Peckett and Sons of Bristol. In July of that year it was delivered to Hams Hall Power Station at Coleshill, near Birmingham, where it was given the number 4 and used for shunting coal wagons.[1]

1738 was declared surplus to requirements by the CEGB early in 1968 and was purchased by SVRSevern Valley Railway member Mr J McNally, arriving at Bridgnorth by road on 13 July of that year. It was steamed shortly after arrival, and used on shunting duties for the rest of the year, also giving footplate rides during the August 1968 Gala.

A lengthy overhaul then followed, with the locomotive returning to traffic in September 1984.[2] It was used at Bewdley during the April 1985 Enthusiast Weekend[3] but saw little use thereafter. By winter 1991 it was out of service,[4] and in spring 1994 SVRSevern Valley Railway News reported that "Anyone interested should contact Jim McNally, the owner".[5] It eventually left the SVRSevern Valley Railway circa November 1995, moving to the South Devon Railway.

1738 made a return visit to the SVRSevern Valley Railway for a ‘Thomas’ weekend in October 2000, appearing as ‘Percy’ alongside LMS Jinty 47383 as ‘Thomas’.

Around 2005 the locomotive was taken into private ownership at Titley Junction Station in Herefordshire,[6] where it was still used as ‘Percy’ from time to time as seen in the 2013 photograph. The Kingfisher Line and Titley Junction Station are privately owned and entry to the public is strictly forbidden. The former website is archived but in 2018 the line was still extant: a 'Steam and and Tea Afternoon' was organised on 18 August with a steam train ride.[7][8] The present status of 1738 is however unclear.