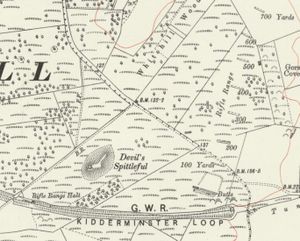 The Halt was located immediately on the Kidderminster side of the Devil's Spittleful (Rifle Range) Bridge. Its construction at a cost of £145 was authorised by the GWRGreat Western Railway on 12 April 1905, and it opened in June of that year. An inspection by Major Pringle on behalf of the Board of Trade on 29 April found the shelter "not quite finished".[3] It was initially served by a steam railmotor service which had begun in January 1905.[4]

The halt was closed on 4 October 1920 and no traces of it remain today. Despite this closure, the area retained a military connection. In late 1943 two large hutted camps were built along nearby Burlish Top (the wooded area on top of the hill on the opposite side of the line from the Rifle Range). These held some 6-7000 American troops, the headquarters of the US Army VIII Corps (Dec 1943 to Apr 1944) and IX Corps (Apr 1944 to July 1944). During World War 2 the easterly part of the heathland became a tented camp used by the 297th U.S. Army Hospital. The area towards the west, between the Safari Park and the SVRSevern Valley Railway, was also used for tank training.[2]