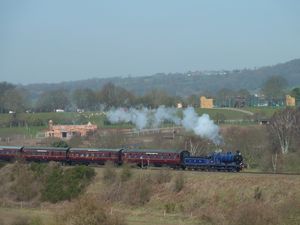 Gala visitor CR 828 passes the Safari Park in 2012
The West Midland Safari and Leisure Park, often referred to as Bewdley Safari Park, adjoins the SVRSevern Valley Railway. It is located north of the Railway between Bewdley Tunnel and Bewdley, and can be seen on the right when travelling towards Bewdley from Kidderminster. The curve in the line at that point has become known on the railway as "Safari Park Curve".

History of the area

The OS Map of 1883 shows that the northern half of the area now occupied by the Safari Park was formerly the large estate of Spring Grove.[1] Spring Grove House is Grade II listed and was built by local chemical manufacturer Samuel Skey between 1787 and 1790.[2][3] The house was badly damaged by fire in 2006.[4] Skey's chemical works was situated on the west bank of the River Severn, about half a mile north of the current Bewdley bridge[5] and the same distance south of Dowles Bridge.

The same map shows the area south of Spring Grove to have been open heathland, much as it is today.

The Safari Park opened in the spring of 1973 under its original name of the West Midland Safari Park. It attracted 700,000 people in 2018 and features a four-mile safari drive through. In January 2019 it was acquired by the Looping Group, a French amusement park operator, which intends to "develop the park into an even more exciting family destination".[6]

Two areas of the park are visible from the railway, both lying within the "Safari Drive Through".[7] Travelling towards Bewdley, the first area is the "African Plains", which most notably includes the Park’s southern white rhinos.

After passing the Stourport Triangle the second area, "The Borderlands", is home to the Park's Bactrian camels. Bactrian camels, also known as Mongolian camels, are native to the steppes of Central Asia. They have two humps on their backs, in contrast to the single-humped dromedary camel.

Until 2020 the area was formerly known as "Elephant Valley" and was home of the Park’s three African elephants. The young bull elephant Sutton was born in May 2014 and was named in memory of West Midlands teenager Stephen Sutton. Stephen established a Teenage Cancer Trust charity and hugged Sutton's mother Five as part of his 'bucket list' of things to do before he died. The third elephant is Sutton's aunt Latabe[8]. The elephants were moved to a new location towards the middle of the Park in 2021.

Early proposals for a connection with the SVRSevern Valley Railway

On Thursday 24 May the Olympic Torch arrived on the SVRSevern Valley Railway. 7812 Erlestoke Manor carried the torch between Bewdley and Kidderminster, pausing for a photo opportunity with the two cow elephants, Five and Latabe.[12].

"2.9 WMT will also be actively developing proposals for a number of new services within the WMR area including [...] New service to West Midlands Safari Park as an extension of Birmingham - Kidderminster services which will operate along the Severn Valley Railway
2.10 The delivery of these new services have not been explicitly contracted within the new franchise and are subject to feasibility studies being undertaken and support from WMCA/TfWM as required."

"December 2018 - We plan to extend Kidderminster terminators onto the Severn Valley Railway, subject to a new station being built at the West Midlands Safari Park."