From SVR Wiki
(Redirected from 34053)
Jump to: navigation, search

Originally built with innovative features including air-smoothed casings and chainAs a unit of measurement, 22 yards or 1/80th of a mile-driven valve gear, many of the locomotives including 34053 were rebuilt by British Railways in the late 1950s.

34053 was built in 1946 at the SRSouthern Railway’s Brighton Works and entered service as SRSouthern Railway no 21C153. It was originally allocated to Salisbury MPDMotive Power Depot but also worked from the Stewarts Lane depot, where it hauled prestige services such as the Golden Arrow on many occasions. In 1960 it was transferred to Bournemouth, where it often hauled the Pines Express on the Somerset & Dorset Railway.

34053 was withdrawn from service by BRBritish Rail or British Railways in October 1966 and towed to Woodham's scrapyard at BarryWoodham Brothers Scrapyard, Barry, South Wales. The source of many locomotives now in preservation. the following March. 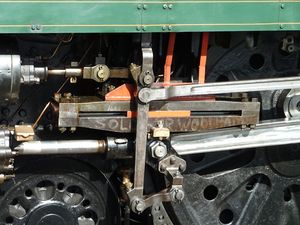 34053 left BarryWoodham Brothers Scrapyard, Barry, South Wales. The source of many locomotives now in preservation. in 1984. Evidence of her time spent there can still be seen today in the form of the words "Sold Mr Woodham" which are visible on the lower left slide bar. After various owners and lengthy periods in store, restoration was finally completed by Southern Locomotives Limited (SLL) in May 2012 at a cost of £773,000. Having no need of the locomotive at Swanage, agreement was reached for 34053 to come to the SVRSevern Valley Railway, with the agreement carrying a break clause every two years. The locomotive arrived at Bridgnorth on 10 May and during running-in pulled its first passenger train in 47 years on 31 July by assisting a struggling GWR 5700 Class 3650. It entered service on 24 August.[1]