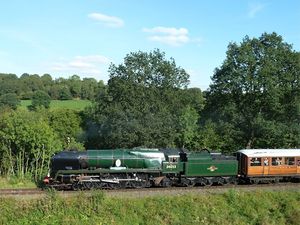 Southern Locomotives Limited (SLL) is an unlisted Company number 02479435 which was first incorporated on 12 March 1990, and is "dedicated to restoring, operating and maintaining Southern's steam heritage."

SLL is the product of several mergers of locomotive owning groups and locomotive acquisitions since the inception of the 'Port Line Locomotive Project' in 1983. It owns SRSouthern Railway BulleidOliver Vaughan Snell Bulleid, Chief Mechanical Engineer (CME) of the Southern Railway 1937-1948 Battle of Britain class locomotive 34053 Sir Keith Park, which entered service on the Severn Valley Railway in August 2012, plus several more locomotives at other locations. SLL's works are at Herston on the Swanage Railway, where restoration of 34053 was completed.

Once a year SLL offers its shareholders the opportunity to 'Drive & Fire' a locomotive. On 29 and 30 September 2016 this was held at the SVRSevern Valley Railway with 34053 and 34027 Taw Valley.

Other SLL locomotives that have visited the SVRSevern Valley Railway are 34072 257 Squadron (Spring 1992), BRBritish Rail or British Railways Standard 4MTThe British Railways system of classifying steam locomotives by power using a number from 0, least powerful, to 9, most powerful, followed by either F for freight, P for Passenger or MT for Mixed Traffic. 2-6-4T 80104 (Autumn 1999) and 34070 Manston (August 2010). For several years a large boiler was to be seen in Bridgnorth yard from another of SLL's locomotives, 34010 Sidmouth. This departed in October 2017.