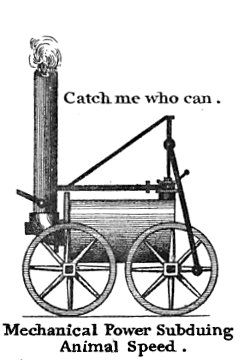 In 1808 Catch Me Who Can, a locomotive built in Bridgnorth by Richard Trevithick, became the first locomotive to carry fare paying passengers on a circular demonstration track in London.

Trevithick 200 was formed by a group of Bridgnorth residents to celebrate the bicentenary by building a working replica locomotive and organising events such as lectures, concerts and a steam rally.[1] It was first registered as a Charity in May 2007.[2]

Following a re-registration as a Charitable Incorporated Organisation (CIO) in 2015, Trevithick 200 is now Registered Charity number 1162485 with eight trustees.[3]

It is a member of The Trevithick Society.

The Charity Commission records the Charity’s objectives as being “To advance the education of the public in the industrial heritage of Bridgnorth, in the town's place in the industrial revolution, and in the history of railway steam locomotion, particularly but not exclusively by the construction, exhibition and demonstration, at the Severn Valley Railway and elsewhere, of a full size working replica of the world famous "Catch Me Who Can" locomotive, built in Bridgnorth in 1808, and by holding discussions and lectures.”[2]

Its income totalled £998 for the year ending 31 March 2018. The primary source of income is a sales stand at railway events. Goods include Trevithick biographies and a framed print of a painting by a local railway artist depicting the original locomotive under test in 1808. In 2018 it was moved from Bridgnorth to Kidderminster with consequent greater foot-fall and sales. Trustees are present at several railway events during any year to display and explain the replica and its historic context to the public, as well as providing ad hoc expositions to interested passers-by when work is being carried out on the engine. The disadvantage of moving the sales stand has been the educational element of interaction with the public suffers.[4]

Catch Me Who can web site