From SVR Wiki
(Redirected from 6634)
Jump to: navigation, search 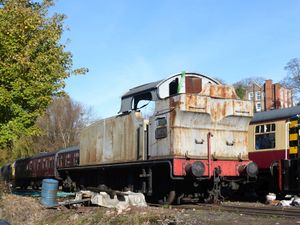 6634 awaiting collection in November 2017
GWRGreat Western Railway 5600 class 6634 was resident on the SVRSevern Valley Railway between 2009 and 2017 but was never steamed.

The GWRGreat Western Railway 5600 Class is a class of 0-6-2T steam locomotive designed by CollettCharles Benjamin Collett, Chief Mechanical Engineer (CME) of the Great Western Railway 1922-1941 and built between 1924 and 1928. They were based on the Rhymney Railway 1904 M class and 1909 R class locomotives. In 1923 the GWRGreat Western Railway absorbed a variety of locomotives from pre-Grouping Welsh railway companies, many of 0-6-2T configuration, and built two hundred locomotives of the 5600 class to replace part of that fleet. Numbered in the 5600 and 6600 series, most were built at Swindon, however 6650-6699 were built by ArmstrongJoseph Armstrong, Locomotive, Carriage and Wagon Superintendent of the Great Western Railway 1864-1877 Whitworth in Newcastle-upon-Tyne. The last of the class remained in service until the end of BRBritish Rail or British Railways(WR) steam in 1965. The class was not used on the Severn Valley Branch in service due to its 'Red' axle weight classification, although one was allowed to work a coal train to Alveley Colliery by mistake. The class was however used on trains for Stourport Power Station.[1]

Nine of the class have survived into preservation, of which 5619 has also appeared on the SVRSevern Valley Railway.

6634 left BarryWoodham Brothers Scrapyard, Barry, South Wales. The source of many locomotives now in preservation. in June 1981, the 131st locomotive to do so, initially to the East Somerset Railway.[3][4] It is owned by The Waterman Railway Heritage Trust.

In 2010 it was reported boiler repairs were going well at LNWRLondon & North Western Railway Crewe, but by 2011 plans had changed and they were instead intending to use the boiler of 'Large PrairieLocomotive with a 2-6-2 wheel configuration' 4115, one of the “Barry Ten”. In Summer 2012 the boiler tubeplate was stolen from Crewe Heritage Centre with serious disruption to progress.[5] By 2014 the SVRSevern Valley Railway reported that there was no progress or commitment on the boiler and the SVRSevern Valley Railway was seeking legal advice concerning the continued lack of progress in order to resolve this long running problem.[6][7]

Peak Rail’s Press Release 12 May 2015 announced: “Dr Pete Waterman OBE DL is delighted to announce that he has reached an agreement with Peak Rail to base his Waterman Railway Heritage Trust assets at its Rowsley site”.[8] Two of its locomotives were moved, but 6634 remained at the SVRSevern Valley Railway.

The locomotive was transported by road from Bridgnorth to Peak Rail on 10 November 2017.[9] The 2017 SVR(H) accounts included a £65k settlement from the Waterman Railway Heritage Trust[10].