Significant events in the history of the Severn Valley Railway in preservation between 1965 and 1969 are set out below.

On Friday 25 June 1965, the 'Kidderminster Shuttle' reported that BRBritish Rail or British Railways had withdrawn the 8.30am 'Cathedrals Express' service from Kidderminster to London. Keith Beddoes, a local railway enthusiast, discussed this with a group of colleagues at work. The subject changed to the attempts to reopen part of the Bluebell line, and Beddoes suggested that the same could be done here.[1]

Letters were written to the local press over that weekend, and on Monday they responded, suggesting a meeting. This took place at the house of Tony Tuite, a colleague of Beddoes, on the evening of Tuesday 29 June. Those present decided to organise a public meeting and arrangements to advertise this were put in hand[1].

The formation of the Severn Valley Railway in preservation officially began on 6 July 1965. The public meeting proposed by Keith Beddoes took place at the Coopers Arms in Kidderminster, attended by around 50 people.

Three possible locations were considered for the potential preserved railway, and the meeting spent some time discussing the merits of these. It was not considered feasible to use a section of the Tenbury Branch between Bewdley and Cleobury Mortimer as BRBritish Rail or British Railways were still using Bewdley station at that time and could not grant access. The Cleobury Mortimer and Ditton Priors Light Railway was also deemed unsuitable because of its remoteness and the relatively light axle load limits of the light railway. The Severn Valley Railway between Bridgnorth and Hampton Loade was therefore chosen.

Those present agreed to form the Severn Valley Railway Society (“the Society”). A committee of 8 was appointed, and the initial membership subscription was proposed as £1, but eventually set at 1 guinea (£1+1shilling) at the suggestion of John Garth, in order to increase funds.[2]

On Sunday 11 July the Society inspected the track from Hampton Loade to Bridgnorth, noting that all the signals and most of the railway installations along the route had been removed.[3] While holding up the old station name board at Bridgnorth to take a photograph, they were challenged “What the hell do you think you are doing?” by a man with a shotgun. This turned out to be George Thorpe (also known as ‘Elias’) who had continued to operate the station refreshment room after the station itself had shut. Once the Society explained their idea, they were quickly made welcome! 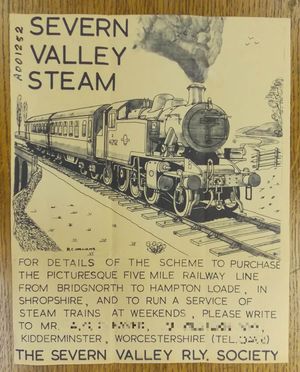 The Society’s initial goal was to operate services over the 4½ miles between Bridgnorth and Hampton Loade. However the Society would also need to take on the track between Hampton Loade and Milepost 144½ near Alveley in order to maintain a connection to the main line via the section beyond, which BRBritish Rail or British Railways was still using for colliery traffic from Alveley Colliery.

A public meeting took place at Kidderminster on 9 August, attended by between 70-100 people. The majority of those attending supported the plans, although some felt the provisional price of £45,000 was too high. Dissent was mainly from representatives of other Midlands preservation societies.[3][4]

Another public meeting took place at Bridgnorth on 31 August, attended by between 50-80 people. The proposals were generally well received[3][4]. 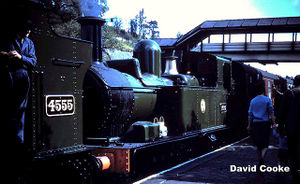 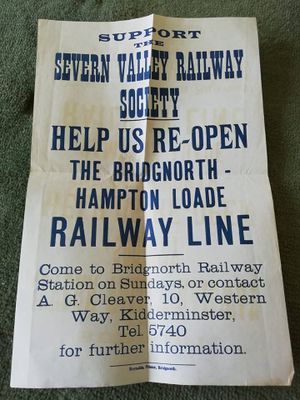 On 19 September 1965 the Stephenson Locomotive Society visited Alveley with a special train from Bewdley, hauled by GWRGreat Western Railway locomotives 4555 and 1420. This helped publicise the preservation scheme.[3]

The first working party took place at Bridgnorth station on Sunday 26 September.[3] Regular Sunday afternoon de-weeding of the track and painting of the buildings continued throughout the 1960s as the station was gradually restored to working condition.

The first edition of SVR News was produced, edited by Paul Wyers. 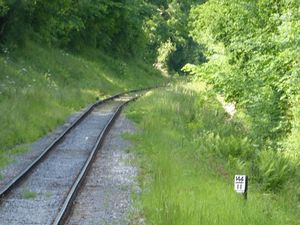 The rest of 1966 was taken up with raising the deposit of 10% for the purchase of the railway. Bridgnorth Station saw regular ‘open weekends’, the first being an exhibition of railway relics in connection with Bridgnorth Arts Festival, over the 29-31 May Bank Holiday weekend. This event included a steam roller operating in the road outside the station[5].

The second Open Weekend on 9-10 July marked the first anniversary of the preservation society. The event featured a number of road traction engines in the station yard. A 5in gauge miniature railway was set up on Platform 2 with 50 yards of track, on which a train hauled by a ‘Hall’ and ‘Pannier’ gave rides to children. Almost 1,000 visitors paid the 1/6d admission fee[5].

The third Open Weekend on 24-25 September was the last without steam traction. A fairground including roundabouts, swings and dodgem card was set up behind platform 2. 1,500 visitors attended, raising £200 for the funds[5].

Society membership grew to around 300 in the first year. 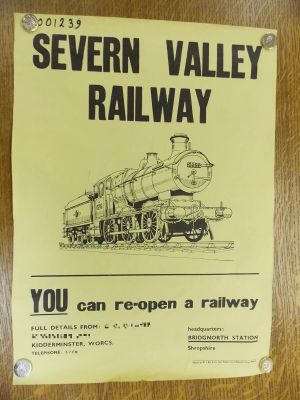 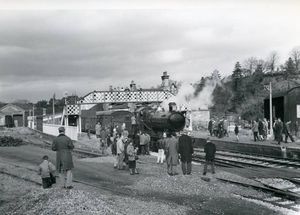 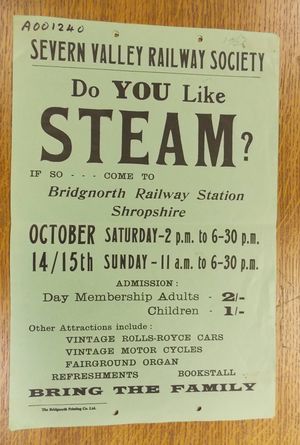 On 25 March the first locomotive and 4 GWRGreat Western Railway coaches arrived at Bridgnorth, including GWR 6562 which is still at the SVRSevern Valley Railway. GWR 0-6-0 No 3205 had made the journey in steam from the BRBritish Rail or British Railways shed at Stourbridge Junction, where it had been re-assembled after being hauled ‘dead’ from the West Country.

Although it was not officially a ‘steam weekend’, the arrival saw several thousand visitors over the three days, with 3205 and two coaches giving rides as far as Oldbury Viaduct. The event featured on ITV's 'Midlands Today, giving the railway a publicity boost.

On 22 April, Ivatt 2MT No 46443 became the second locomotive to arrive on the SVRSevern Valley Railway. BRBritish Rail or British Railways gave permission for the move from Newton Heath (Manchester) to Bridgnorth via Crewe, Stafford, Bescot, Dudley, Stourbridge and Kidderminster to be made in steam.

Following a further payment of £2,000, BRBritish Rail or British Railways granted access to the Bridgnorth goods shed and outbuildings.

On 1 June, exchange of contracts for the purchase took place between BRBritish Rail or British Railways and the Severn Valley Railway Company.

Another 'Open Weekend' took place on 24-25 June. The event featured traction engines, a miniature railway and other attractions as before, although there were no engine movements. Despite poor weather, around 2,000 people attended and £225 of funds were raised.

The first full 'Steam Weekend' took place on 14-15 October. GWR Brake Third 5136 had been installed in the cattle dock at Bridgnorth and was brought into use as a refreshment coach.[7] 3205 and 46443 worked a four coach formation with the last train of the evening being double headed with five coaches. Operations at the time were under the direction of Mr W Gillett, the Chief Operating Inspector of BRBritish Rail or British Railways’s Birmingham Division, and he allowed a full service to Hampton Loade to be run. The Railway had not yet received the Light Railway Order allowing rides to be given to the general public. However SVRSevern Valley Railway members could travel, so the Railway did a brisk trade in ‘Day Member’ tickets, while full membership of the Severn Valley Railway Society also benefited, passing the 1,000 mark by the end of the year.

During 1967 the Civil Engineering Department constructed a 30ft long locomotive inspection pit at Bridgnorth. A water tower was purchased from Dudley and erected at Eardington, the only source of suitably soft water on the line.

On 1 February, BRBritish Rail or British Railways published their application for the first Light Railway Order. Objections were received from Shropshire County Council on the grounds that it would prejudice the proposed construction of the Bridgnorth By-pass (an estimated £60,000 increase on the original estimate of £1m was quoted) and from Highley Regional District Council that it would prevent road improvements on a narrow bridge in the Eardington area[8].

The galas continued with the tacit approval of BRBritish Rail or British Railways. The Easter Steam Gala on 13-15 April featured No 3205. Large crowds resulted in long waiting times, hindered by the lack of a run round loop and sufficient coaches. Admission fees were 3/6d for adults and 2/- for members and children, with around £600 in funds raised[5].

The Autumn Gala on 31 August and 1-2 September saw 10,000 visitors to Bridgnorth, with 43106 and 46443 making alternate trips to Hampton Loade and back.[10] The capacity issues of the Easter Gala were resolved, and over £1,000 was raised on that Bank Holiday alone. However BRBritish Rail or British Railways, which was still the LROLight Railway Order holder, became concerned at safety at such sizeable events.

On 7 September, work began to dismantle the signal box at Pensnett which over the following months would be dismantled and reassembled at Bridgnorth[11].

In addition to the "Members' day ticket" type operations, a number of private parties were also carried on the SVRSevern Valley Railway prior to opening. The 'Gilt Edge Carpet Special' with 46443 on 21 September 1968 was one such[12].

Negotiations with Shropshire County Council and the other dissenting parties proved fruitless, and a Public Enquiry became necessary to consider the proposed Scheme for the Railway. This was held on 1-2 October 1968 at County Hall in Shrewsbury. BRBritish Rail or British Railways gave backing for the Railway, and many other witnesses were called. The plans put forward for the bypass and evidence on road usage appeared to those present to be hastily put together.

On the afternoon of second day of the Enquiry, a special train consisting of 3205 and three coaches took the Inspector and all parties from Bridgnorth to Bewdley to view the Scheme at first hand. The Minister of Transport’s decision would be based on the Inspector’s report. 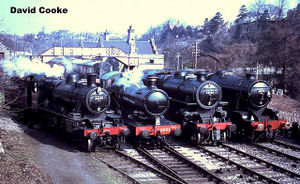 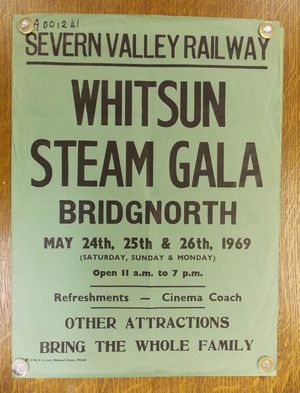 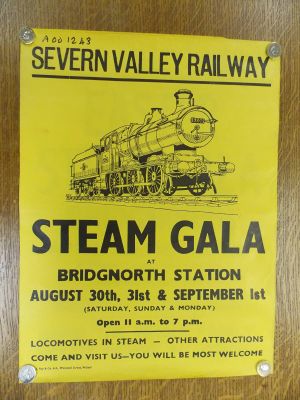 The 'Easter steam gala' on Sunday 6 April saw Bridgnorth's four tender locos lined up in the yard (see photo)[13]. Members' trains were not allowed following BRBritish Rail or British Railways's ban, although 3205 was in steam and travelled light engine to Eardington to take water[14].

The result of the Public Enquiry was a recommendation by the Inspector that the first LROLight Railway Order should be granted. However in June 1969 the Minister of Transport rejected the recommendation, citing the potential extra cost to public funds of the Bridgnorth By-pass Bridge if the Railway went ahead (the objections relating to the Eardington road bridges were not sustained). The Minister invited the parties to meet and resolve the issue.

Around this time, the Society rented the former goods-shed and yard at Bewdley (then still an active BRBritish Rail or British Railways station). This space would be used for restoration of locomotives and rolling stock, 4566 and 1501 being among the earliest residents.

In order to make progress, it became necessary for the SVRSevern Valley Railway to agree formally that they would either fund the By-pass Bridge or end the line south of the By-pass when and if it was built. Given that assurance, the County Council withdrew its objections and the Minister accordingly found in favour of the Scheme. On 9 October an Evening Mail headline reported "Green light for S.V.R. to run trains from Bridgnorth"[17].

On 6 December 1969 the Severn Valley Railway Society was merged into The Guarantee Company, with the latter now being considered the proper entity to take the Scheme forward. The AGM coincided with the announcement that the first LROLight Railway Order had been granted, allowing BRBritish Rail or British Railways to work the line from Bridgnorth to Alveley as a Light Railway, although of course they had no wish to do so. However the granting of that order meant The Guarantee Company could now apply for the second LROLight Railway Order to transfer ownership to the SVRSevern Valley Railway.