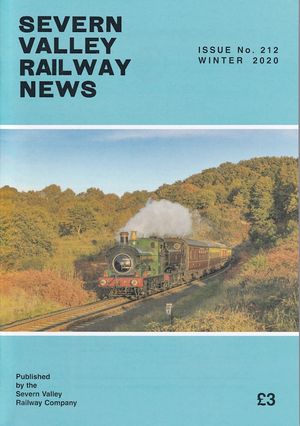 The earliest editions of SVRSevern Valley Railway News served the purpose of publicising the Severn Valley Railway Society.[1] The first issue took the form of type-written foolscap sheets with some hand-drawn and photographic illustrations included. It was produced on a hand-operated duplicator at John Garth’s factory in Lye.[2] Issue 2 (February 1966) was produced in the same manner but with the pages folded in half to produce a booklet.

Issue 3 (July 1966) under the new editorship of David Williams reverted to the unfolded page layout. At the time the Society membership had reached 300 and David's brief from Secretary Bert Cleaver was to produce four magazines and eight other newsletters per year (the latter were discontinued five years later after 37 issues in December '71).[2] Further issues of SVRSevern Valley Railway News were produced in the same format every 3 to 5 months ending with issue 10 in October 1968.[1]

By the end of 1968 membership had risen to around 3,000 and hand duplication was becoming unworkable. Issue 11 (January 1969) was the first to be commercially printed and bound in the A5 booklet format which is still used today.[2] It consisted of 24 pages including the outside covers[note 1] and was wholly in black and white. Issue 14 (Autumn 1969) was the last published by the Society with issue 15 (Winter 1969-70) the first published by the Guarantee Company. Simple colour bands appeared on the front cover from issue 26 (Winter 1972-73), while a one-off colour photograph was used on the cover of issue 28 (Summer 1973). Colour photos on the cover became a regular feature from issue 34 (Winter 1974-75), although they did not appear in the magazine itself until the centrefold of issue 110 (Spring 1994). Other colour photos began to appear increasingly from issue 115 (Summer 1995), although contemporary black and white photos were still in use as late as SVRSevern Valley Railway News 160 (Winter 2007-08). Since that time pictures have been wholly colour apart from historical photographs.

Issue 209 (Spring 2020) was for the first time wrapped in an environmentally-friendly potato starch envelope. Some other material may also be distributed with the magazine such as the Guarantee Company accounts and AGM paperwork or appeals leaflets. Issue 210 (Summer 2020) included The Way Ahead, a COVID-19 themed supplement.

Although SVRSevern Valley Railway News is a magazine of the Guarantee Company, it covers the Railway as a whole and frequently includes material relating to the other SVR companies and preservation groups.