From SVR Wiki
(Redirected from 600)
Jump to: navigation, search
Longmoor Military Railway No. 600 'Gordon' was built in 1943 at the North British Locomotive Company’s Hyde Park Works in Glasgow as works number 25437. The locomotive, which is named after Gordon of Khartoum, is a World War II ‘Austerity’ locomotive designed by R. A. RiddlesRobert Arthur "Robin" Riddles, Member of the Railway Executive for Mechanical and Electrical Engineering responsible for the design of the British Rail Standard Class locomotives, and was the second of 150 such locomotives built. It was originally numbered WD 73651 for the War Department.

Despite superficial similarities of being blue and named Gordon, there is no ostensible link between the locomotive and the fictional anthropomorphic tender locomotive in The Railway Series books by Reverend Wilbert Vere Awdry.

Although the 2-10-0 design was intended for overseas use, ‘Gordon’ only saw wartime service in Great Britain. Post-War, Gordon was mainly confined to the Longmoor Military Railway where, numbered 600, it was used by the Royal Engineers as a driver-training engine. However in 1957 during the Suez crisis, it is known to have worked highly secret trains between Longmoor and Southampton.[1]

Gordon made a brief appearance as an express passenger locomotive in the Children's Film Foundation film "Runaway Railway", filmed at the Longmoor Military Railway in 1965.[2] Gordon also worked special trains, such as the RCTS 'Longmoor Railtour' on 16 April 1966 from Woking onto the LMR, and onward to Staines.[3]

Gordon's last major steam event was the final open day at Longmoor camp on 5 July 1969. The line closed on 31 October 1969, Gordon working the final train, from Oakhanger to Longmoor[3]. 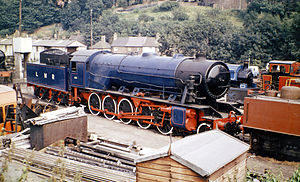 Gordon on the SVRSevern Valley Railway in 1972 (Wikimedia Commons) 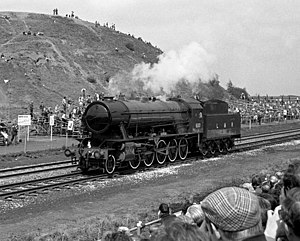 Gordon at Rainhill in 1980 (Wikimedia Commons)

The Association of Railway Preservation Societies, through the Longmoor Trust, negotiated in 1970 a lease of part of the LMR, including an indefinite loan of Gordon. Subsequent objections caused the planning application to fail.[3] Gordon was still the property of the British Army when the Longmoor Military Railway closed and was subsequently sold for non-military purposes. Following this closure, the Army asked the Tranport Trust if it could provide a suitable home for the locomotive.[4] Gordon arrived on loan to the SVRSevern Valley Railway on 20 September 1971 through the courtesy of the Army and the Transport Trust, accompanied by three vintage carriages.[5]

After steam testing in January 1972, the locomotive entered service.[6] In August 1975 it travelled to Shildon under its own power to attend the Rail 150 celebrations. Service continued with only a brief break for the boiler to be completely retubed during the summer of 1978.[7] In 1980 Gordon travelled in light steam to Bold Colliery from where it participated in the locomotive parade at Rocket 150 at Rainhill.

Gordon is one of only two steam locomotives on the SVRSevern Valley Railway (along with 34027 Taw Valley) which are equipped to work with air-braked rolling stock. This facility was occasionally used in preservation, including in May 1982 when Gordon worked an incoming train of 19 wagons delivering 1,800 concrete sleepers.[8].

Having seen action in each of the years 1972 to 1984, Gordon’s boiler succumbed to broken stays and thin firebox plates and the locomotive was withdrawn from service at the end of that year, in the words of Chief Engineer Alun Rees "much to the relief of many of the footplate crews".[9]

After a period out of service, Gordon re-entered service on 8 December 1990, the day being marked by a severe blizzard.[10] On 4 September 1993, Gordon took over an incoming railtour with the VSOEVenice Simplon Orient Express Pullman train at Kidderminster, when Prince Michael of Kent travelled on the footplate. The locomotive was also used for a series of specials with TV entertainer Roy Castle on Saturday 25 March 1995.[note 1] Service continued until 1998, although in the SVRSevern Valley Railway News locomotive notes for spring 1999 Jan Chojnacki reported that "I have it on good authority that a sweepstake is being organised for the next failure".[11] The words proved prophetic, as shortly thereafter a fractured small tube causing significant damage in the firebox.[12]

Gordon has not seen service on the SVRSevern Valley Railway since 1999. It was one of the original locomotives to go on display in The Engine House at Highley from opening in March 2008. On Friday 25 July 2008, Gordon was formally handed over from the National Army Museum to the SVRSevern Valley Railway in a ceremony at the Engine House, where it remains on display.[13][14] Gordon is owned by SVR(H).

Due to its size and weight, Gordon is restricted to 5mph over Victoria Bridge.[15]

Mileage recorded by Gordon as reported in SVRSevern Valley Railway News was as follows: