This page lists locomotives which have carried the name 'Severn Valley Railway', or names associated with locations on or near it.

Locomotives named in honour of the Severn Valley Railway

31413 hauled a special service from Birmingham New Street to Kidderminster and Bewdley on Friday 22 April 1988. It was named “Severn Valley Railway” by Mr Sidney Newey, Director of Provincial Services for BRBritish Rail or British Railways, at a ceremony at Bewdley.[2] The nameplates were removed on 30 April 1993,[3] and were transferred to classmate 31233.

The locomotive was withdrawn on 1 May 1997 and scrapped at Doncaster on 29 July that year.[4]

By 2015 it had become a Network Rail DepartmentalRolling stock used for the railway’s own functions (engineering etc.) rather than for general passenger or goods traffic. locomotive, carrying a yellow livery with grey/black roof and NRNetwork Rail logos.[8] In 2018 it was offered for sale by NRNetwork Rail and preserved at Mangapps Railway Museum.

While operated by Virgin Trains, 47828 was named at a ceremony at Kidderminster on 28 April 2001 during the 2001 Diesel Gala.[11] The full name was displayed as Severn Valley Railway Kidderminster Bewdley Bridgnorth, the longest name carried by any Class 47.[12]

The name was removed on 31 January 2005 [13], with one of the nameplates being put on display inside the SVR offices at Comberton Place. Shortly afterwards, while being operated by Cotswold Rail, 47828 was renamed ‘Joe Strummer’. It migrated to the Direct Rail Services Class 47 fleet before preservation by D05 Preservation Ltd. 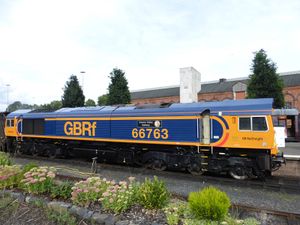 E.M.D.Electro-Motive Diesel, Inc., an American manufacturer of diesel-electric locomotives. Class 66 Co-Co Number 66763 attended the Diesel Gala in May 2016, courtesy of GB Railfreight. The locomotive was given the name Severn Valley Railway at a ceremony during the gala.

66763 made a return visit in July 2017 for PR purposes, accompanied by five GBRf biomass hoppers. A third visit was made for the 2018 Goods Gala, appearing in a demonstration freight train with three GBRf IIA hoppers, this configuration being repeated in a visit for a private charter event in June 2019.

Bombardier Class 220 Voyager 220025 attended the 2002 Diesel Gala, courtesy of Virgin Trains. The unit was named Severn Voyager at the event, replacing its previous name ‘Virgin Voyager’[14]. As with all other units of the class, the name was removed on transfer to Cross Country trains in 2007 [15].

A number of GWRGreat Western Railway classes of locomotive had themed names reflecting locations near (or not so near!) the company's lines.

It should be noted that GWRGreat Western Railway 6901 Arley Hall was named after Arley Hall in Cheshire, not Arley in Worcestershire.