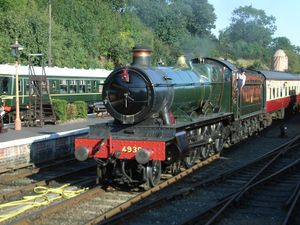 Kinlet Hall was built at Swindon and entered service at Chester in June 1929. In 1941, the locomotive’s bogie and main frames were severely damaged when falling into a bomb crater after a heavy bombing raid on Plymouth. Repaired at Newton Abbott, the locomotive continued in GWRGreat Western Railway and BRBritish Rail or British Railways(W) service until finally withdrawn from Cardiff East Dock shed January 1964. She was then acquired by Woodham's, Barry in June 1964.[1][2]

Kinlet Hall left BarryWoodham Brothers Scrapyard, Barry, South Wales. The source of many locomotives now in preservation. in May 1981 as the 126th departure. After spells at Peak Rail, the Gloucestershire Warwickshire Steam Railway and Llangollen,[3] restoration was finally completed at the Birmingham Railway Museum (now Tyseley Locomotive Works) in 2000. The locomotive was mainline certified in June 2000 and worked a ‘ten year ticket’.[2] She appeared as a guest at the 2007 Autumn Steam Gala; as the line was only open between Kidderminster and Bewdley due to that summer’s storm damage, Kinlet Hall and sister locomotive 4953 Pitchford Hall made a number of runs between Bewdley and Birmingham Snow Hill. In 2009, now out of mainline certification, Kinlet Hall spent the summer and autumn on hire to the SVRSevern Valley Railway to cover for a locomotive shortage and also appeared at the Autumn Steam Gala.

After a further overhaul, Kinlet Hall was again mainline certified and returned to service in 2011.[2] She arrived back on the SVRSevern Valley Railway for a second period on hire in autumn of 2013. After appearing at the Autumn Steam Gala and working the Christmas services, Kinlet Hall made a final appearance at the Spring Steam Gala before moving on.

Kinlet Hall Ltd is a private company, Company number 01585117. The Company was incorporated on 10 September 1981 as Kinlet Hall Locomotive Co. Limited, re-registered as Kinlet Hall & Thornbury Castle Ltd on 26 January 2017 and re-registered under the present name on 17 January 2020. Companies House records show Jonathan Jones-Pratt became the the Company's sole Director and ultimate controlling party in 2016.[4] As of 2020[update] he is Chairman of West Somerset Railway PLC, where the locomotive is usually based.