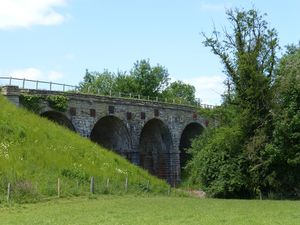 Borle Viaduct (Bridge 21), which is situated between Arley and Highley, carries the SVRSevern Valley Railway over Borle Brook. Like other bridges on the Severn Valley Railway, it was built with the capacity for dual tracks but only ever installed for single line running. The viaduct is 42 yards in length, with four arches of 25ft span. Fishermen's Crossing lies a few yards to the north, with the site of the former Kinlet and Billingsley Sidings a similar distance to the south.

The viaduct in preservation

The viaduct has suffered from mining subsidence over the years. Regular re-ballasting to overcome this has resulted in the line now being above the original parapet walls[1]. Although originally there was no edge protection on the viaduct, sets of post and rail fencing were added.

During winter of 1976-77, tie bars were inserted in the viaduct to strengthen it as part of the program to upgrade the line for heavier locomotives. The work was carried out with the assistance of the Manpower Services Commission. Intense cold and heavy rain brought work to a temporary halt while a large slip at Sterns and the collapse of part of Bridgnorth station car park were dealt with. Services in early 1977 ran for some weeks between Bridgnorth-Highley and Bewdley-Arley until work on the viaduct was completed[2].

During winter of 2018-19 contractors were appointed for the first phase in renovating the structure, which was showing fresh signs of water penetration. Work began on 8 January with removal of the track, ballast and material down to the existing concrete “flaunching”. Investigation revealed that the water penetration was occurring at the edge of the area filled in 1977 which had been shuttered and a mortar capping applied to seal it; since that time the capping had failed and the shuttering rotted away.[3] The remedial work involved some additional drainage discharge points being provided, an application of high specification sealer and layers of new imported fill material. The works also included the replacement of the fencing with more appropriate steel tubing fencing as used elsewhere on the SVRSevern Valley Railway.[4] £111,619 was spent on this on stone and brick work repair, with a contribution of £70,000 from the Charitable Trust.[5]

Preventative maintenance planned for 2020-2021 was put on hold due to the effects of the 2020 coronavirus disease (COVID-19) pandemic[5]. 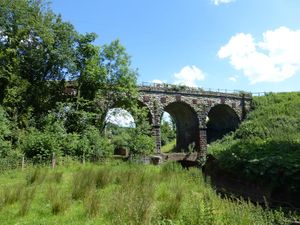 Borle Brook rises in the hills to the west of the Railway. It passes near the former Billingsley Colliery and Kinlet Colliery before flowing under Borle Viaduct. From there it passes under Brooksmouth Bridge, via which the Severn Way runs along the bank of the River Severn between Highley and Arley, before exiting into the River Severn.

A public footpath from the Severn Way runs beneath Bole Viaduct on the north side of Borle Brook, giving access to the west side of the viaduct.

Borle Brook is normally an insignificant stream, but during the freak storm of June 2007 it became a raging torrent which damaged the concrete and brick 'training walls' upstream and downstream of the viaduct itself. It took some months for the water level in the brook to subside sufficiently for repairs to be carried out; these involved soil nailing and installing rock filled 'gabion' baskets. The delay meant this was the last area to be reinstated shortly before the public re-opening of the whole line in March 2008.