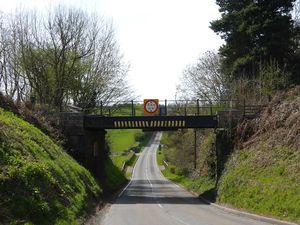 Hay Bridge from the East
Hay Bridge (occasionally spelt "Haye Bridge"; Bridge 26) allows the main road between Bridgnorth and Highley to pass underneath the Severn Valley Railway between the villages of Eardington and Chelmarsh, and is situated just South of Eardington. It is named after the nearby Hay Farm, the farmhouse of which is a 17th Century Grade II listed building.[1]

During the public enquiry in October 1968 to determine whether the SVRSevern Valley Railway could reopen in preservation, Shropshire County Council objected to the proposed reopening. As well as the possible future construction of Bridgnorth Bypass, it was claimed that improvements to the main road could not be completed unless three bridges (Hay Bridge, Cleobury Road Bridge and Eardington Bridge) were demolished. Under cross examination it transpired that no money was then available for these improvements,[2] and ultimately a Light Railway Order was granted allowing reopening to take place.

Prior to opening in May 1970, an inspection revealed that parts of the main bridge girders were rotting away. During two weeks In February 1970 more than a ton of steel plate was welded onto the bridge to strengthen it.[3]

Much of the bridge was replaced by the SVRSevern Valley Railway in June 1975 as part of a programme of work to upgrade the line and increase the permitted axle weight of locomotives using it. The new bridge was built by Rubery Owen who had replaced the bridge at Highley in 1974. One of the edge beams still carries a plaque showing “Brymbo 1861”.

The bridge was used as a filming location in the 1977 Walt Disney Productions live action film Candleshoe.

The low clearance makes the bridge subject to strikes by road vehicles, a notable example being on 6 April 1994 when a skip lorry demolished the west-side walkway and moved the main girders two feet out of alignment! Damage to the bridge resulted in resulted in both the railway and road beneath being closed, but a concerted effort by the P Way Department and other SVRSevern Valley Railway volunteers, the SVRSevern Valley Railway’s Consulting Engineers, Shropshire County Council and the Railway Inspectorate allowed the line to re-open temporarily for traffic on 9 April. 6024 King Edward 1, which was visiting the railway at the time, was the first locomotive to cross the repaired bridge. Permanent repairs were carried out over the next month.[4]

Another bridge strike occurred on 11 June 2007, with the line being closed for a day and a half on this occasion while a crane lifted the bridge back onto its bearings.[5] Eight days later a freak thunderstorm closed the line again, this time for a number of months.

As a result of bridge strikes the height restriction was changed from a warning (red triangle) to a prohibitory (red circle) traffic sign.