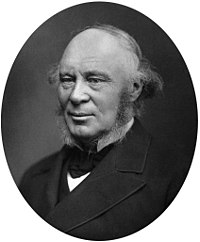 Sir John Fowler, 1st Baronet, was born at Wadsley, Sheffield, in 1817. By 1844 he had established himself in London as a consulting engineer specialising in the laying out and construction of railways. Fowler was appointed by the Severn Valley Railway Company in 1855 following the early death of their first Chief Engineer, Robert Nicholson. By the time of his appointment, Fowler had already worked on many railway schemes including the Manchester, Sheffield and Lincolnshire Railway, the East Lincolnshire Railway, and the Oxford Worcester and Wolverhampton Railway. He had also been appointed Chief Engineer of London’s first underground railway, the Metropolitan Railway, in 1853.

Fowler oversaw the final development of plans for the construction of the Severn Valley Railway, and was instrumental in the line being laid out to accommodate double track working (even though this was never implemented). He is also credited with the design of Victoria Bridge built between 1859 and 1861, and its slightly younger upstream counterpart Albert Edward Bridge built between 1863 and 1864. However the multiplicity of jobs with which he was associated, including being retained by the Great Western Railway following the death of Isambard Kingdom Brunel in 1859, meant that the day to day construction of the Severn Valley Railway was overseen by Resident Engineer Henry Orlando Bridgeman.

Amongst many other engineering projects, Fowler is perhaps most notably credited with the design (in partnership with Benjamin Baker) of the steel cantilevered Forth Bridge; a design recommended after the tragic collapse of Sir Thomas Bouch's Tay Bridge in 1879.