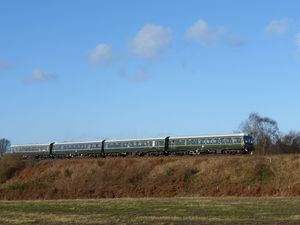 The DMUDiesel Multiple Unit operating as a four car unit.

Withdrawal of the class from service began in 1990. Unlike some other early models of DMUDiesel Multiple Unit, the class 108 did not contain asbestos, making them suitable for preservation on heritage railways.

The DMU group operates five cars. These can be used as separate three car and two car units, but are usually combined to form a five car unit for purposes such as the summer Scenic Cruises. From time to time maintenance requirements may result in operation as a four car unit.

The first 2 cars, DMBSDriving Motor Brake Second M51941 and DMCLDriving Motor Composite with lavatory M52064 arrived on the SVRSevern Valley Railway from Doncaster via Tyseley on 30 March 1990, initially on a two year loan. The 2-car set was formally commissioned on 13 October 1991. After a return trip from Kidderminster to Bridgnorth, the MD of Regional Railways presented the key to officers of the DMUDiesel Multiple Unit Group.[2]

A fourth car, DMBSDriving Motor Brake Second M51935, was purchased in June 1992 as a source of spares, but by 1993 had been restored and entered service.

In autumn 1996 the Group acquired a fifth car, unpowered DTCLDriving Trailer Composite with lavatory 56208 which arrived on 21 December, giving an additional 65 seats capacity.

M51935 was extensively damaged by fire in May 2008 in what was believed to be an arson attack. Subsequently it left the SVRSevern Valley Railway to be broken for spares elsewhere. The Group acquired DMBSDriving Motor Brake Second M50933 as a replacement. In 2010 alterations were made for the conveyance of wheelchair passengers.