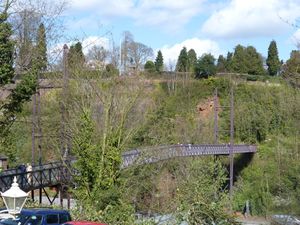 The Bridgnorth Footbridge Trust was the body responsible for raising the funds to rebuild the Hollybush Road Footbridge outside Bridgnorth station. The original footbridge had been built in 1895 but was closed in 1970 and demolished in 1976 after being deemed unsafe.

Events prior to the establishment of the Bridgnorth Footbridge Trust

Following the closure of the Severn Valley Branch in 1963, the condition of the footbridge deteriorated and by 1967 owners Bridgnorth Rural Borough Council had announced plans for its demolition.[1] In January 1969 SVRSevern Valley Railway News reported that a public “Save the Footbridge” appeal had been launched and that Sir Alfred Owen, Managing Director of the Rubery Owen organisation who built the original footbridge, had visited Bridgnorth. The ‘Footbridge Appeal Fund’ was organised by Bridgnorth member Roger Sellick and was independent of the SVRSevern Valley Railway Company.[2] £1,500 had been raised by early 1971.[3]

Following the demolition of the bridge in 1976, interest appears to have waned. However in 1982 Bill Hinkley happened on the copies of SVRSevern Valley Railway News reporting on the old bridge and the attempts to save it and began to canvas opinions on building a new bridge.[5] By 1985 a committee had been formed and over the next three years designs were drawn up and planning permission obtained.[5]

The Trust was formed in the late 1980s[5] and was granted charitable status on 1 June 1989 as Charity number 701636.[6] On 30 March 1990 the Trust’s president, Sir William McAlpine, launched the Bridgnorth Footbridge Appeal seeking to raise £275,000 towards the cost of constructing a new footbridge.[7]

By the Fund’s 4th AGM in September 1992, fund raising was still continuing in spite of the economic recession at the time. A by-product of the recession was that the cost was thought to be around £100,000 less than before.[8]

The Fund was removed from the Charity Commission register on 27 February 1998 when it ceased to exist.[6]