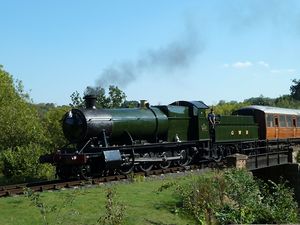 2857
The 2857 Society was first founded as the 28xx Society in 1972. The Society was an unincorporated membership society that owns GWR Locomotive 2857 and LMS Brake Van 730866. Membership is by subscription, with a requirement for members also to become a shareholder. The Society publishes a newsletter, '28 Lines', around twice a year.

The Society is also a minor shareholder of Severn Valley Railway (Holdings) PLC.[2]

Until 2014 The Society owned and used GWRGreat Western Railway carriage 5043 (now under conversion to GWR 9581 Wheelchair accessible Buffet Car) as a workshop, when it was transferred to the Great Western (SVR) Association. Since 2014 it uses Bewdley-based GWR 143 Tool & Packing Van.

The Society has produced limited edition prints to raise funds: