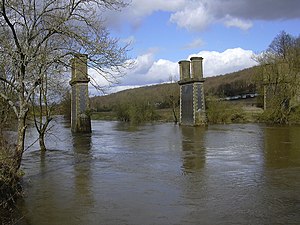 Dowles Bridge formerly carried the Wyre Forest Line over the River Severn around one mile north of Bewdley. It was reached by a sweeping embankment curving off to the left from the Severn Valley Line at a location now referred to as the Tenbury Wall.

Construction of the Tenbury & Bewdley Railway was authorised by an Act of Parliament on 3 July 1860. The Act made several stipulations regarding the bridge where the railway crossed the River Severn at Dowles. The bridge design and construction required the approval of the Admiralty Office, and the bridge was to be lit at night during and after construction for the safety of river traffic.[1]

The bridge was designed by William Clarke, the Engineer of the Tenbury & Bewdley. Admiralty approval for its construction was granted in 1862.[2] The design was described in the Board of Trade Inspector's report prior to opening as "a viaduct over the Severn of 3 openings each of 70ft carried by wrought iron lattice girders on masonry piers and abutments".[3]

The bridge was built during 1862 and 1863 at a cost of £7,000.[4] It was brought in sections from Brassey’s Canada Works, Birkenhead and erected on site. The style of lattice construction was common in America at the time, where it was known as a ‘Town Truss’ after Ithiel Town who patented the design in 1820.[4]

Prior to opening, the bridge was tested using locomotives belonging to the West Midland Railway who charged a fee of £12 for the service.[5]

The curve leading onto the bridge at the Bewdley end was subject to a 15 mph restriction.[6]

During the Second World War the bridge was designated a vulnerable point and protected by a movable steel and stone rail block.[7]

All traffic ceased on the Wyre Forest Line on Good Friday, 16 April 1965, with the electric token working between Cleobury Mortimer and Bewdley North signal boxes being withdrawn on 8 May 1965. For a short period the line including the bridge was still used by demolition trains, being treated as a siding.

Appeals in the press for the bridge to be retained and converted to a roadway came to no avail, and in March 1966 the iron girders were finally removed.[8] The brick abutments and piers still stand, and are visible from SVRSevern Valley Railway trains between Northwood Halt and Bewdley.

In March 2017 the Rotary Club of Bewdley announced their support for a project to reinstate a footbridge on the existing piers, providing a connection between National Cycle Route 45 and the Wyre Forest.[9]

Home movie on Media Archive for Central England showing dismantling of the bridge, starting at 3:52.