993876 was built by BRCWBirmingham Railway Carriage & Wagon Company at Smethwick in 1957 to Diagram 1/597, Lot 3040.[3] It was later rebuilt by Network Rail with roller bearings and plywood bodywork in place of the original oil axleboxes and planked body. It is a 'vacuum blow-through, air fitted' vehicle.[4]

A Hornby model of DB 993876 has been produced showing the brake van in Loadhaul livery, and other references can be found referring to the van in this context. Loadhaul Ltd was a railfreight operator based in the north east of England which came into being in 1994 during the privatisation of BRBritish Rail or British Railways and ultimately became part of the company English Welsh & Scottish Railway (EWSEnglish, Welsh & Scottish Railway, a rail freight company).[5]

Prior to acquisition by the SVRSevern Valley Railway, 993876 was used on Bridport steel trains on the East Usk Branch. An article and photo by Paul Theroux describes the process, which involved the locomotive running round the train at East Usk yard and then propelling it down the branch with the brake van leading. 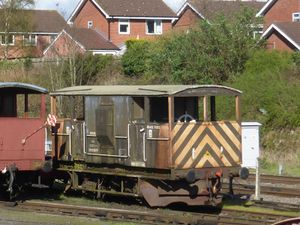 The SVRSevern Valley Railway's other 'Shark', 993989 is vacuum braked. 993876 arrived at Kidderminster on 30 March 2017 by road from East Usk yard. It was repainted in grey in July 2017. The same month, GB Railfreight Class 66 No 66763 Severn Valley Railway visited the SVRSevern Valley Railway with five biomass hoppers. The locomotive and hoppers made round trips over the line on 26 and 27 July with 993876 included as the brake van, a purpose for which it was suited being air braked. It is now used regularly on Permanent Way duties along with the other recently acquired air-braked rolling stock such as the Rudd, Seacow and Parr wagons.