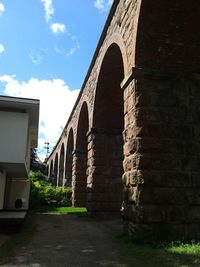 Sandbourne Viaduct (Bridge 9), also referred to as Bewdley South Viaduct (and sometimes misspelled in older documents as 'Sambourne Viaduct'), is situated only a few yards from the Bewdley Bypass Bridge. It was built in 1860 and is 101 yards in length, with 10 brick arches of 25ft span on sandstone piers.

On the approach to Bewdley, 'The Loop' from Kidderminster and the original Severn Valley Line from Hartlebury ran side by side over the viaduct, and both sets of tracks are still in situ. SVRSevern Valley Railway trains travel on the former, which is on the side further from the River Severn and Bewdley Town Centre. The latter carries no passenger traffic, but sees frequent use as a siding to hold wagons and engineer’s trains or for rail access to the Stourport Triangle.

The viaduct was acquired by the SVRSevern Valley Railway in preservation at the end of 1972 as part of the southern section of the line between Alveley Colliery and Foley Park.

The local sandstone is vulnerable to erosion, meaning the viaduct needs ongoing repairs. However by 2010 it was thought that no major work had been carried out on its structure for at least fifty years. In that time the viaduct's drainage had become totally blocked, resulting in the sandstone being permanently water-logged and consequently deteriorating. A major repair project was therefore required which was to be carried out in two phases. The drainage would be remedied in the first phase, with the replacement of sandstone being carried out at a later date after the structure had dried out. Local company Walsh Construction were appointed as contractor.[1]

The first phase was carried out over the winter of 2010-11. Once the track had been lifted, the contractors removed all the spoil to expose the arches of the viaduct. The spoil was transported by road-rail dumpers to the station car park for removal from site. Once this was complete, new drains were core-drilled through the arches with this part work being finished by early February. A concrete raft covered by a waterproof layer was then installed over the structure, shaped to feed into the new drains. The formation was then rebuilt to bottom ballast level, after which it was handed back to the SVRSevern Valley Railway so the track and signalling could be completed.[1] Final ballasting was completed by the end of February. Aided by fine weather during February and March, this phase of the project was completed on time and to budget.[2]

Stonework restoration and replacement formed part of the 2014-15 'Winter Works'[3] with pier no. 7 under repair. The Severn Valley Railway Charitable Trust Ltd has also been instrumental in funding stonework restoration on the viaduct with £60,000 contributed in 2017.[4]