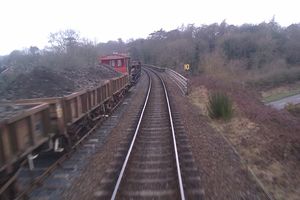 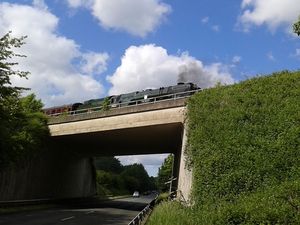 Bewdley Bypass Bridge from below. The bridge was built and jacked into place from near the photographer's location

The Bewdley Bypass Bridge (Bridge 8) was built in 1986, allowing the new A456 bypass to go through the embankment adjacent to Sandbourne Viaduct. The SVRSevern Valley Railway already owned and used this section of the line and so, unlike the Bridgnorth Bypass Bridge, the construction was at no cost to the Railway.

In order to minimise disruption to the SVRSevern Valley Railway, the contractors A. Monk & Co Ltd. built the bridge between May and October 1986 on a concrete track south of the embankment, approximately 150ft from its final position. Immediately after the last train on Sunday 19 October, the track and signal wires on the embankment were removed by SVRSevern Valley Railway staff and volunteers. The embankment was removed by the contractors the following day and construction of the foundations and north wing walls took place over the next 2 weeks. On 6 November, large hydraulic rams were used to jack all 2,500 tons of the new bridge into place; a process which went without incident. By 26 November the south wing wall was complete and the remaining embankment had been reinstated. A final effort by the SVRSevern Valley Railway PWPermanent Way and S&TSignals & Telegraph staff saw the bridge re-ballasted, the track laid and signalling equipment re-connected in time for the first Santa Special services on Saturday 29 November.