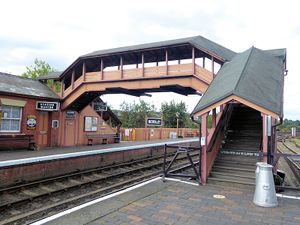 Bewdley station was always planned as a junction, the Tenbury Branch and Kidderminster Loop Line both having been approved before its opening. Despite this, when the station opened on 1 February 1862 there was no footbridge, the small island platform being reached by a foot crossing. This remained the case when the Tenbury & Bewdley Railway opened in 1864, However with the approaching completion of the Kidderminster Loop Line, construction of a footbridge was finally authorised on 19 December 1877 as part of works which also included enlarging the island platform and providing it with a canopy shelter at a total cost of £1,666. The loop line itself had been completed by March 1878, but on 22 March an inspection by Colonel Rich of the Board of Trade required the footbridge and shelter to be completed before permission for opening could be given. With this construction finished, permission for opening was finally granted on 29 May with the Loop line opening on 1 June 1878.[1]

Old photographs suggest that the footbridge changed little has during the Branch's commercial history, other than presumably receiving routine maintenance. BRBritish Rail or British Railways ended passenger services at Bewdley (to Hartlebury and Kidderminster) on 6 January 1970, with Bewdley station being purchased by the SVRSevern Valley Railway in preservation in December 1972. SVRSevern Valley Railway passenger services from Bridgnorth to Bewdley began on 18 May 1974.

In 2001 the SVRSevern Valley Railway Board agreed to spend "…a large sum of money" on refurbishing, repainting and re-roofing the footbridge. Due to the size and complexity of the structure, it was decided to employ the contractors George Law rather than do the work in-house. It was also felt necessary to close the station while the work was carried out, with trains passing through non-stop. Following the 2001 Spring Steam Gala on 3-4 March, the station was closed for 3 weeks for the repairs to the footbridge to be carried out. At the same time the station staff led by Station Master Alan Longdon carried out a refurbishment of the canopy on platforms 2 and 3.[2]

In 2016 the footbridge was included in the Wyre Forest District Council Local Heritage List with the item number SVR026*. The List identifies historic buildings and structures which are considered to be of value to the local historic environment although not protected by statutory designations (i.e. 'listed'). The listing describes the footbridge as "Bewdley Station. Iron and timber bridge crossing rail tracks. Dual-pitched roof to canopy, covered in grey roofing felt. Decorative cast iron brackets to internal roof supports."

A banner repeater on the footbridge for 29 signal was removed some years ago.