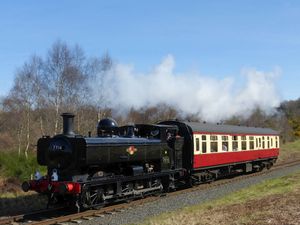 The Fund had its origins with the SVRA Kidderminster Branch who conducted a search to find a suitable pannier tank for the SVRSevern Valley Railway around 1970. None of those in use by the NCBNational Coal Board at the time were available, so L95 (5764) was acquired from London Transport in 1971. In 1973 tender forms were received from the NCBNational Coal Board for 7714 and further fund raising allowed the purchase of the Fund's second pannier. In 1977 the the Kidderminster branch committee recorded their thanks to those who had contributed to the Pannier Tank Fund.[1]

In 2019 a new exhibition 'L95, A Locomotive History from London to the Severn Valley Railway' opened in The Engine House. The display includes copies of documents relating to the establishment of the Fund and the acquisition of L95.

The Fund does not have a public presence through social media or website.