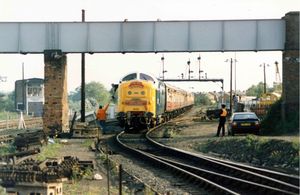 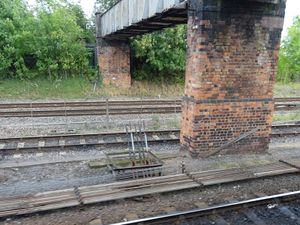 From the opening of Kidderminster in July 1984, the connections to Platform 1 were controlled by a ground frame, which was unlocked by the Bewdley South-Kidderminster staff. The 6-lever ground frame was built using parts of the lever frame from the old Stourport signal box[1].

The points at the far end of Platform 1 were controlled independently of the ground frame, while the frame itself controlled the points to Platform 1/1 Engine Line and the catch points in 1EL (the run round loop), the connection to BRBritish Rail or British Railways and the sidings[2].

The ground frame was still present in 2018 (see lower photo). It was removed in mid-2019 for refurbishment and eventual use in the proposed Permanent Way Sidings at Foley Park,[3] where it was installed over the winter of 2019/2020.