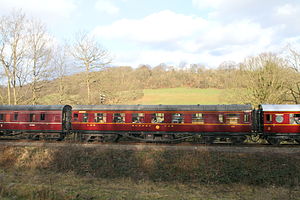 After service with the LMSLondon Midland & Scottish Railway and BRBritish Rail or British Railways, 9355 was one of two carriages acquired by Gilt Edge Carpets of Kidderminster for use as a mobile carpet showroom, the train being hauled by former SVRSevern Valley Railway resident 61994 The Great Marquess.

Gilt Edge Carpets donated it to the SVRSevern Valley Railway in August 1971. On arrival it had no internal fittings and was initially used as a Bar Car with loose tables and chairs, and later with fixed seats and a counter. A major refit in 1985-86 saw a conversion to the design of a 1930s LMSLondon Midland & Scottish Railway Buffet Car, following which it was given the fictitious number 149 as a continuation of the original 1932 145 - 148 Bar Car series. In 1996 it was repainted in GWRGreat Western Railway livery, for use in the SVRSevern Valley Railway Dining Car set.