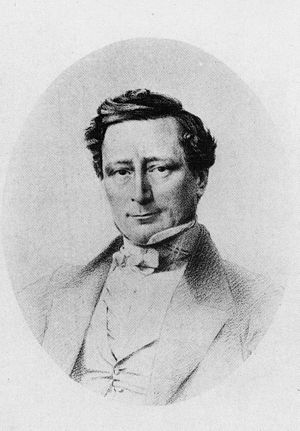 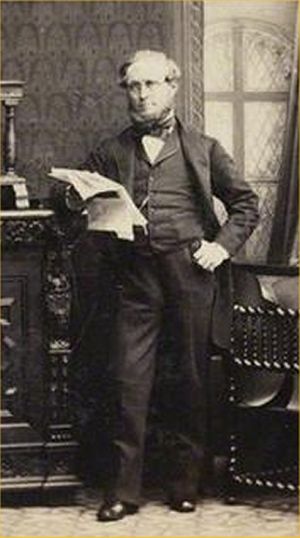 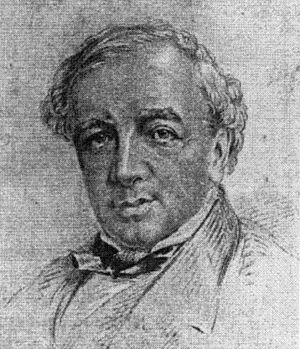 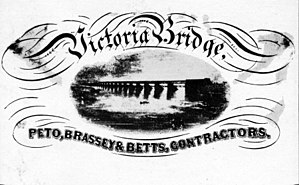 Morton Peto, Thomas Brassey and Edward Betts were the partnership of civil engineers who were responsible for the construction of the Severn Valley Railway. They were also responsible for the construction or many other railways both in the UK and overseas; the latter including the Grand Trunk Railway in Canada and by coincidence, the Victoria Bridge across the Saint Lawrence River at Montreal.

Sir Samuel Morton Peto, 1st Baronet (1809-1889) could be regarded as a typical Victorian entrepreneur. As well as being a civil engineer and railway developer, he served as a commissioner for and guarantor of the Great Exhibition of 1851, and was a Member of Parliament for 15 years. In business, he liked to take a directorship or similar management role in projects with which he was associated.[1]

Peto began a civil engineering partnership in 1834 with his cousin Thomas Grissell. An early railway related job was the construction of Birmingham Curzon Street railway station, although the business was primarily concerned with conventional building which including the Reform Club in London and Nelsons Column. Grissell eventually ended the partnership in 1846 having become increasingly nervous of the risks taken by Peto[2][3].

Edward Ladd Betts (1815-1872) was apprenticed to a builder but became interested in engineering. He worked on a number of railway contracts for his father’s firm, William Betts & Sons, for which he assumed full responsibility when his father retired in 1845.

In 1848 Peto and Betts enters into a formal partnership as civil engineering contractors. Their partnership, known as Peto and Betts, specialised in the building of the rapidly expanding railways of the time. This partnership, which lasted until 1866, was responsible for many railway projects, including construction of the Oxford to Worcester and Tipton to Wolverhampton sections of the Oxford Worcester and Wolverhampton Railway[1].

Thomas Brassey (1805-1870) was a civil engineering contractor and manufacturer of building materials. For many of his contracts he would enter into partnership with other contractors, including Peto and Betts. Although the partnership of the three was normally referred to as Peto, Brassey and Betts[4] as seen in the Canadian handbill, the ceremonial scroll buried in the foundations of Victoria Bridge referred to "Messrs. Brassey, Peto and Betts, contractors".

Brassey’s manufacturing company, Thomas Brassey and Co of Canada Works Birkenhead manufactured the wrought iron sections of Dowles Bridge. The scrollwork on Victoria Bridge also refers to "Messrs. Brassey & Co., Contractors." In another of his regular partnerships, the contractors for Albert Edward Bridge were recorded as Messrs Brassey and Field.[5] Some contemporary newspaper reports on the construction of the Severn Valley Railway also made reference to Brassey and Field. William Field, also referred to in contemporary newspaper reports as "Captain Field", was a railway contractor from Shrewsbury.[6]

In 1854 Peto, Brassey and Betts built the Grand Crimean Central Railway between Balaklava and Sevastopol to transport supplies to troops involved in the Crimean War. The following year Peto was made a Baronet in recognition of his wartime service.

Involvement with the Severn Valley Railway

The first prospectus for the Severn Valley Railway, issued in July 1852, called for a proposed capital of £600,000 (around £89m in 2022 values). Brassey initially took the largest individual shareholding, having subscribed £30,000 (almost £4.5m in 2022 values).[7] Peto and Betts were not among the first subscribers, but the three contractors contributed £47,250 towards the £90,000 parliamentary deposit lodged with the Bank of England after the Bill was submitted for consideration by Parliament in November 1852.[2]

While the Severn Valley Railway was struggling to raise capital, Peto wrote to the Board on 12 November 1853, his letter beginning:

You will feel my interest in the Severn Valley Railway as sufficient excuse for my troubling you. I am most anxious that no expense of any kind should be incurred until we are really in a position to proceed.

The Board responded that they agreed with his views and undertook a number of cost saving measures including ending Robert Nicholson's annual salary. However they also prepared another Bill for submission to Parliament in March 1854 which as well as proposing an amended route, also confirmed the (salaried) directors would continue in office. On 11 April 1854 Peto wrote to SVRSevern Valley Railway chairman Jonathan Thorp threatening to oppose the Bill if the office of Directors was made permanent, and putting the matter in the hands of his solicitors. An exchange for letters between the solicitors and the SVRSevern Valley Railway took place, in which the solicitors pointed out that Peto was now a substantial shareholder and someone whose reputation in railway matters would not go unheard in Parliament. In consequence Peto was elected to the Board on 3 May 1854 and on 8 May the Bill was withdrawn. Ten days later Jonathan Thorp resigned and Peto became Chairman.

Over the next three years, although heavily involved in other enterprises, Peto contributed to the planning and contents of the Severn Valley Railway Acts of 1855, 1856 and 1858 which led to the final approval for the building of the railway.[8] He also attended a number of public meetings at Bridgnorth, Bewdley, Stourport and elsewhere during 1856 to help drum up public support.[9]

In July 1857, confident that construction work would soon be able to start, Peto wrote to the board of directors submitting his resignation on the basis that his continuing in the role would be inconsistent with his proposed role as a contractor for the building works. His letter read:[10][11]

As it is now necessary that arrangements should be made for the construction of your line it is essential that I should rightly understand the position in which I am placed with the Company.

It will no doubt be in your recollection that when this undertaking was first established I and my friends agreed to take Shares to the Amount of £225,000 upon the understanding that my friends were to be the Contractors for the works at prices to be arranged with the Company’s Engineer. At a subsequent period it was unfortunately discovered that the Company’s finances were in a very unsatisfactory state owing to a variety of names having been put down in the list of subscribers of persons who were not competent to fulfil their engagements. At this crisis I entered into the Direction and was placed in the Chair of the Company with a view to set matters to rights, and I am happy to think that since that period the exertions of myself and my colleagues have been attended to with beneficial results.

My continuance in the Direction would of course be inconsistent with my being interested in the Contract, and I think it therefore right to notify you that I am prepared to retain the Interest in the Company for which I have subscribed and to take the Contracts for the Works as originally intended, provided the Company feel themselves in a situation to provide the additional funds requisite for carrying out the Undertaking.

With a view therefore to entering upon this question I think it is right now to retire from the Direction, and beg you will consider this letter as an intimation of my Resignation.

Whenever the Directors are prepared to enter upon the subject I shall be ready to agree to the terms of a Contract for the Construction of the Works upon being satisfied that the necessary Funds will be forthcoming on the part of the Company.

I am Gentlemen,
Your very obedient servant,
S Morton Peto

In his letter, “the Direction” was Peto’s term for the Board of Directors. By that time, John Fowler was the company’s engineer with whom Peto, Brassey and Betts (“my friends”) would work.

The board accepted Peto’s resignation but by the end of 1857, due to continuing difficulties in raising the finances, they had begun to prepare two bills for submission to Parliament, one to extend the timetable for construction until July 1861 and the other to abandon construction altogether. On Peto’s advice, the decision was delayed until February 1858, and in the meantime Peto Brassey and Betts prepared a tender with three costings for the construction of the railway to FowlerHenry Fowler, Chief Mechanical Engineer (CME) of the Midland Railway 1909-1923, and of the London, Midland and Scottish Railway 1923-1933’s specification. The costings, which included £22,500 for stations, were:[12]

The tender assumed payment of £240,000 in shares at par. In February 1858 the board agreed to the third option. The contract for the work was signed on 26 May, while the abandonment bill was withdrawn and the extension bill was passed by Parliament on 23 July 1858, giving a deadline for completion of 23 July 1861.[13]