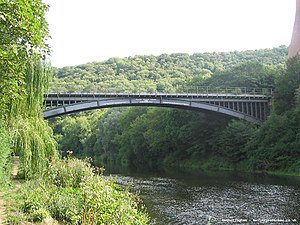 Albert Edward Bridge carried the line from Coalbrookdale and Lightmoor Junction across the River Severn near Buildwas, the junction with the Severn Valley line. The bridge is almost identical to Victoria Bridge, with a 200ft cast iron span, and was named after Albert Edward (later Edward VII), the eldest son of Queen Victoria. It was designed by the SVRSevern Valley Railway's chief engineer, John Fowler, and opened on 1 November 1864. It is cast-iron with brown brick abutments with chamfered yellow brick angle quoins. It has a single segmental girder arch with a mid-20th century steel parapet. Plates at the apex of the arch record the date and name of the bridge and the names of its engineer and the contractors responsible, Messrs Brassey and Field.[1] Another plate records the fact that the bridge was cast and erected by the Coalbrookdale Company of Ironbridge.

It was Listed as a Grade II Listed Building on 24 February 1986.[2] It is also identified by Primary Reference Number (PRN) 12662 on the Shropshire Historic Environment Record as Albert Edward Bridge (B4380) over Severn at Buildwas.[3].

In 2019 the line was mooted by Network Rail (NRNetwork Rail) to be mothballed, but on 9 June Vintage Trains ran a railtour with GWRGreat Western Railway CollettCharles Benjamin Collett, Chief Mechanical Engineer (CME) of the Great Western Railway 1922-1941 4073 Castle class 4-6-0 7029 Clun Castle. It was unable to traverse the bridge, stopping just short, as NRNetwork Rail engineers had closed it to all rail traffic (apparently over structural issues with the abutments).[4][5][6]

Telford Steam RailwayTelford Horsehay Steam Trust Limited, a Charitable heritage railway located at Horsehay, Telford with proposals for running heritage trains into the Ironbridge Gorge and onto the former GWR Severn Valley branch. have set out plans to extend across the bridge to the power station site.[7]