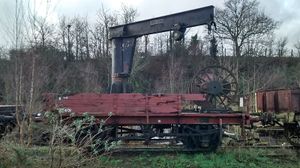 This LMSLondon Midland & Scottish Railway drop-sided wagon was built circa 1944-45 at Derby. Initially these wagons may have been used for moving small pieces of military equipment, but post-War were mainly used for moving containers, the drop-sides removing the need for chaining these down unlike ordinary flat wagons such as the “ConflatGWR telegraphic code signifying a flat wagon for containers”. The wagons were vaccum-fitted, and were given the telegraph code 'MEDFIT'.[1]

While still in service, 476401 was later fitted with a small 'Python' pedestal crane[2] to assist Carriage and Wagon repair teams carrying out wagon wheel changes ‘in the field’. This crane can still be seen on the wagon today.

The wagon was moved to the SVRSevern Valley Railway arriving 20 December 1990 from the fledgling Southall Railway Preservation Centre by owner J.J. Smith, along with several other wagons including Brake Van 955243.[1] In 1991 it was used to transport the axle and wheels of 55577 to Bridgnorth for tyre turning after the wheel profiles were damaged during the Autumn Steam Gala.[3] It received an overhaul in 1992 involving complete replacement of the body planks and renewal of the concrete fill around the base of the crane. It was subsequently used on several other occasions for the movement of wheels.[4]

As of 2020[update] the wagon and crane have spent some years stored at the Stourport Triangle awaiting overhaul.