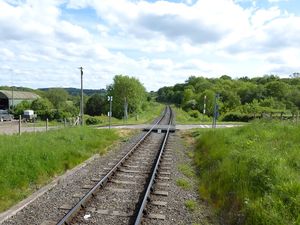 Fishermen's Crossing, likely named for its use by fishermen to access the nearby River Severn, is located between Arley and Highley, just North of Borle Viaduct. It is also known as Coombys Farm Crossing, after the nearby farm to the east of the line, now part of a small holiday park[1].

New gates were installed at the crossing at the end of August 2002. SVRSevern Valley Railway News noted that "This was required purely to conform with regulations - the gates are quite useless, as they are kept permanently open by all concerned the entire time, as were the perfectly sound ones they replaced."[2] Two years later in August 2004, the crossing was the scene of a collision between a "Steam School Special" hauled by Ivatt Class 2 46443 and a van which drove onto the crossing without stopping, the crossing gates having been left open by a previous user.[3] The van was carried some distance down the track, with the driver suffering injury[4] though fortunately not fatal. H.M. Railway Inspectorate found no fault with the locomotive/train braking or the signing of the crossing, and no blame for the collision was attached to the Railway[5][6].

Ongoing concerns over safety at the crossing led to discussions with the Office of Rail Regulation in 2013, following which Fishermen's Crossing became a full, open crossing. This involved the removal of the gates and the introduction of speed humps and signage, placing the onus on the crossing user to observe and use the crossing in accordance with that signage[7].