Questions can be posted on the wiki at Query Corner, or on the Talk pages for each page. Such queries may one day end up on the daily question, so feel free to leave plenty of questions on the wiki!

What's the minimum number of people needed to run a train from one end of the line to the other and back?

I often see trains running on non public running days, it looks like Bradley Manor on test again today, so I wondered how many people it takes, apart from the loco crew and guard.

I know Arley and Hampton Loade signal boxes can be switched out. Do all the others need to be manned?

I've heard of "One engine in steam" working. Can the SVRSevern Valley Railway be operated that way? I guess it's not that simple as it still needs to run round at both ends.

What about PWPermanent Way trains during the closed season? Surely there aren't volunteers sitting in every box all day waiting for the train to pass?

Answer: Non-public train: 1, the driver, running under an engineering possession or on tokens that have previously been released. Public train: 7, consisting five signalmen, one driver, and one guard. Also possible with 6, with one signalman working both signalboxes at Bewdley, which is permissible for a limited service (e.g. an evening diner).

(This question has been given honorary membership as a Daily Question, despite pre-dating the first question under that name!)

Does anyone have any details about the "SVRSevern Valley Railway Permanent Way Fund"? The only record of their existence appears to be their ownership of a single PWPermanent Way coach, bought 20 years ago!

Answer: None, although it was suggested that John Walker of Bridgnorth PWPermanent Way might have some knowledge relating to the query.

It has been suggested that they gave up maintenance responsibility of their respective locomotives to the company after initial restoration in the early '70s.

Did they give up ownership as well? Are any of these funds still actively fundraising?

Answer: All three funds still exist, but at least the 75069 Fund is no longer actively fundraising. There is a former 15xx funnel with a coin slot at Bewdley that states that it is for the restoration of 1501.

Why is Bridge 16 built to single track width, when much of the infrastructure was built to allow future doubling?

Most of the bridges on the SVRSevern Valley Railway were built to double track width, although the line was only ever laid as single track.

One exception is Bridge 16, the one in the field between Arley and Victoria Bridge, which appears to be single track width.

Is it just the perspective of the photo, or is really that narrow?

Why is this the odd one out?

Answer: Unclear, but it was suggested that the bridge may have been rebuilt at a later date due to damage (e.g. subsidence). It was noted that the bridge is architecturally very similar to the nearby Bridge 19, which is built to double track width. The bridge has been on OS maps since at least 1885. 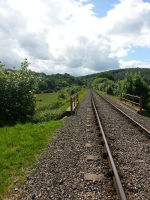 Assuming the carriage is standard 24v DC and passengers were using their own 240v AC shavers, how was this achieved without a modern inverter?

A second 240v AC axle driven generator would only work while the carriage was moving.

Answer: Not clear, but perhaps it was assumed that shaving would've been done whilst the train was in motion, due to the timings of the train (i.e. it arrived at its destination some time after passengers would have woken up).

What is the building on Pan Pudding Hill visible in this photograph from 1962?

Answer: The building was a Civil Defence Look-out Post in WW2, and the sheds were used by the Royal Observer Corps. One building was of brick and had a range finder on the Roof. Photos of ROC shed: 1 and 2. Perhaps later used for radio communications/training at RAF Bridgnorth?

Who is the owner of the Rudd ballast wagons purchased by the SVRSevern Valley Railway?

The SVRSevern Valley Railway recently purchased the Rudd ballast wagons which have been on loan since 2007.

When did Eardington first gain a goods loop, and was this ever used to pass trains?

Before the current dead-end siding, and the short-lived preservation-era run round loop, Eardington historically had a single-ended goods siding similar to the one today, serving the local ironworks.

However, there are references to this siding being a goods loop until 1959, and it's not clear when this loop was constructed (perhaps when the station was?), or how it was used or signaled (if at all).

Answer: 1882/1883 OS maps show an unusual amount of signals in the area (1 bottom right, 2 top right, 3 top left, signals marked "SP"), and the lack of signals in later maps is perhaps linked to the closure of the local ironworks in 1890. Further lines of enquiry being followed up.

Does anyone have any recollection of former SVRSevern Valley Railway resident 5474 "Carnarvon" being used as a shunter by Bulmers in 1973?

I've come across a single off-hand mention of 5474 "Carnarvon", which was resident at the Bulmers Heritage Centre at the time, being used to shunt wagons of cider apples. Due to the oil crisis, it was presumably cheaper to use than the diesel shunters they had.

Whilst not directly an SVRSevern Valley Railway event, it's a nice little tale if true!

Who painted the mural under Wribbenhall Viaduct in Bewdley and when?

And has anyone got a better photo to replace this one please?