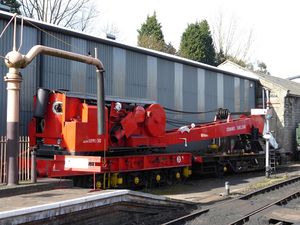 RS 1087/30 was built by Cowans Sheldon as works number 60 of 1960,[1] one of a batch of eight such breakdown cranes. Each crane was fitted with a Spencer Hopwood boiler, working at a pressure of 150psi, which provided steam for self-propulsion and steam braking when working independently. The steam also provided the power for lifting loads up to 30 tons, using hydraulically powered control gear. 1,000 gallons of water were carried. The crane could be towed at up to 60 mph when travelling to attend breakdowns and accidents, and was vacuum braked for that purpose.[2][3]

RS 1087 was allocated to Hellifield until 1977. It was later given BRBritish Rail or British Railways DepartmentalRolling stock used for the railway’s own functions (engineering etc.) rather than for general passenger or goods traffic. number ADM 1087/30. 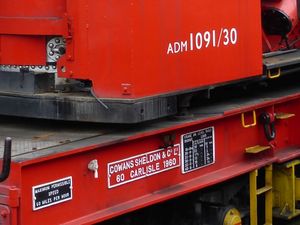 Manufacturer's plate showing Works No 60 of 1960

The SVRSevern Valley Railway acquired sister crane RS 1091 (works number 65 of 1960) in June 1977. RS 1087 was acquired from the Keighley and Worth Valley Railway, arriving from Haworth on 15 August 1982. At the time it was intended to assist with the construction of the Bridgnorth Bypass Bridge, although it was ultimately not used for that purpose.[2]

One of the two cranes, believed to be RS 1091, was scrapped and cut up in 2010. The crane still existing on the SVRSevern Valley Railway is believed to be RS 1087, as it bears a manufacturer's plate showing Works No 60 of 1960. However the cab carries the number RS 1091.

DB 998520 arrived with RS 1087 on 15 August 1983 from the Keighley and Worth Valley Railway. DB 998524 arrived with RS 1091 in June 1977 from Chester. The Railway Heritage Register Wagon Survey states that both crane runners were inspected in February 2013. The crane runner on the steam crane in service carries the painted number BRBritish Rail or British Railways DB 998524, although it does not carry a makers plate to confirm this.