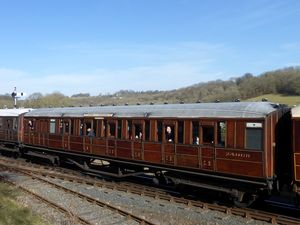 LNERLondon & North Eastern Railway Brake CompositeCarriage having more than one class of seating, ie First and Third or latterly First and Standard. Corridor 24068

24068 is a Brake CompositeCarriage having more than one class of seating, ie First and Third or latterly First and Standard. Corridor (BCK). It has a welded underframe and was outshopped in 1937 as one of 69 built to Diagram 169 between 1936 and 1940, with Rexinean early form of vinyl used by the LNER for wall coverings in teak coaches interior in art-deco style. It was renumbered 10078 in the 1943 renumbering of LNERLondon & North Eastern Railway locomotives and carriages. Following nationalisation it became E10078, E10078E and finally on passing to the Great Eastern section GE10078E. We believe it was overhauled at York in 1964, but may not have returned to traffic.

24068 was purchased for preservation from York by Dr F.G.A Noon, but not before seats, internal doors and many fittings had been removed. It moved to the SVRSevern Valley Railway in 1972, and ownership passed to the LNERLondon & North Eastern Railway (SVRSevern Valley Railway) Coach Fund in 1979. It was returned to traffic with replacement fittings from SVRSevern Valley Railway stock but lack of funds prevented proper restoration. Between 1982 and 1987 it carried its BRBritish Rail or British Railways number GE10078E, and was withdrawn for an overhaul in 1992. This began in spring of 1997, initially with a cosmetic overhaul as the first vehicle through the SVRSevern Valley Railway’s new paint shop. Following a number of photo charters with the North Norfolk Railway's B12, a full restoration began in October 1999. This was completed in 2000, with the coach now in LNERLondon & North Eastern Railway livery as 24068.